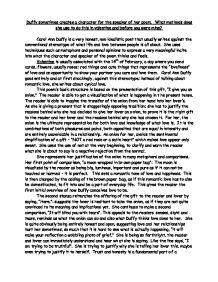 Duffy sometimes creates a character for the speaker of her poem - What methods does she use to do this in valentine and before you were mine?

Duffy sometimes creates a character for the speaker of her poem. What methods does she use to do this in valentine and before you were mine? Carol Ann Duffy is a very honest, non idealistic poet that usually writes against the conventional stereotype of what life and love between people is all about. She uses techniques such as metaphors and personal opinions to express a very meaningful incite into what the character and speaker of the poem thinks and feels. Valentine is usually associated with the 14th of February, a day where you send cards, flowers, usually roses; red things and cute things that represents the "loveliness" of love and an opportunity to show your partner you care and love them. Carol Ann Duffy goes entirely and at first shockingly, against this stereotype; instead of talking about romantic love, she writes about cynical love. This poem's basic structure is based on the presentation of this gift, "I give you an onion." The reader is able to get a visualisation of what is happening in the present tense. The reader is able to imagine the transfer of the onion from her hand into her lover's. As she is giving a present that is staggeringly opposing tradition; she has to justify the reasons behind why she has decided to give her lover an onion, to prove it is the right gift to the reader and her lover and the reasons behind why she has chosen it. ...read more.

The verb to cling is repeated again, this suggests the inescapability of the memories they have, the way the relationship is constantly being painstakingly processed through the mind as well as the physical associations "finger" the relationship also has. The poem is finalised on the last and fifth comparison the poem makes "cling to your knife". A knife is a very strong noun it has associations of death, pain, misuse and of general endings. This is what it represents in this poem. Duffy states "your" knife, as if it belongs to her lovers, the point has been reached where she has expressed her views entirely honestly by thinking through what she wanted to say, and the time has come where her lover has to make the decision whether to end the relationship or to move on to the next step. Before you were mine is also a poem about love and relationship, except this is about the love between a daughter and a mother. Duffy also writes this poem in first person, this means that like Valentine we immediately get a sense of openness and honesty about what she is saying. This poem is all about the changes her mother went through in life, from growing up, to having relationships with men, and then to finally having children and settling down. ...read more.

She sees her mother's past like a "ghost clatters towards me", the mix of past and present where when she daydreams and imagines her mothers true character sitting on the bench in the park with love bites on her neck. It is clear that Duffy can only see her mother's happy, content, free personality in her past and is sad at the fact that she has had to make her mother change. "Even then I wanted the bold girl winking in Portabello, somewhere in Scotland, before I was born" and goes on to say, "That glamorous love lasts" as if to say, she couldn't never be anyone other properly, than that young care free girl that she affected so much. Duffy expresses a great deal about how she feels about her mother and the regret she had for being the course of such a drastic change in her life. In both poems she speaks honestly and is not necessarily completely forthright about how she directly feels, but she describes the situation she is in very well and allows the reader to put herself into Duffy's place and make assumptions of what it would be like for themselves. This is a very powerful way of creating a character for the people as it is almost like being the character ourselves. So ultimately she creates such a great sence of situation and describes what its like using such extensive flawless metaphors, it allows use to make ussumptions and investigate how she feels. ...read more.