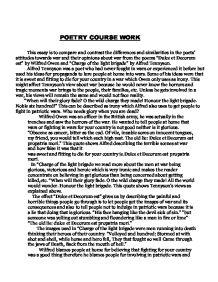 POETRY COURSE WORK This essay is to compare and contrast the differences and similarities in the poets' attitudes towards war and their opinions about war from the poems "Dulce et Decorum est" by Wilfred Owen and "Charge of the light brigade" by Alfred Tennyson. Alfred Tennyson was a poet who had never fought in wars or experienced it before but used his ideas for propaganda to lure people at home into wars. Some of his ideas were that it is sweet and fitting to die for your country in a war which Owen only uses as irony. This might affect Tennyson's view about war because he would never know the horrors and tragic moments war brings to the people, their families, etc. Unless he gets involved in a war, his views will remain the same and would not face reality. "When will their glory fade? O the wild charge they made! Honour the light brigade. ...read more.

"When will their glory fade. O the wild charge they made! All the world would wonder. Honour the light brigade. This quote shows Tennyson's views as explained above. The effect "Dulce et Decorum est" gives us by describing the painful and horrible things people go through is to let people get the images of war and its consequences and also to tell people not to indulge in patriotic wars because it is a lie that doing that is glorious. "His face hanging like the devil sick of sin." "but someone was yelling out stumbling and floundering like a man in fire or lime" "The old lie: dulce et Decorum est propatria mori." The images used in "Charge of the light brigade were men running into death thinking their heroes of their country. "Volleyed and hundred; Stormed at with shot and shell, while horse and hero fell, They that fought so well Came through the jaws of Death, Back from the mouth of hell." ...read more.

Also I realised that Alfred Tennyson saw that people like to have and hear good things so he sugar coats the bad scenes in his poem with good words by the use of irony. Contrary to Alfred Tennyson, Wilfred Owen does the exact opposite of his poem describing all the horrid scenes of war in his poems and saying that involving in patriotic wars is bad and not glorious as people think by believing in lies being told to them to involve in wars. He does this by being honest and telling the truth about wars not hiding anything from the people at home. I also realised that Wilfred Owen tells the people mostly about the disadvantages and not getting any glory because by doing this people would be discouraged because they would like to be rewarded for taking such risk of putting their lives on the line in wars for their country. To conclude I think the poets were successful in putting their message across to the people about war by the use of irony, arguments, points, views, persuasion and imaginative writing to make people believe their views of war. ...read more.