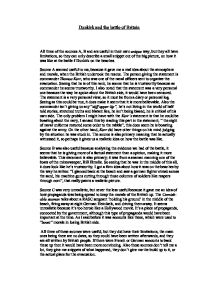 Dunkirk and the battle of Britain.

Dunkirk and the battle of Britain All three of the sources A, B and are useful in their own unique way, but they all have limitations, so they can only describe a small snippet out of the big picture, on how it was like at the battle f Dunkirk on the beaches. Source A seemed useful to me, because it gave me a real idea about the atmosphere and morale, when the British undertook the rescue. The person giving the statement is commander Thomas Kerr, who was one of the naval officers sent to organize the evacuation. Seeing that he is of this rank, he seems that he is trustworthy because as commander he seems trustworthy. I also noted that the statement was a very personal one because the way he spoke about the British side, it would have been censored. ...read more.

The source is also primary meaning that he actually witnessed it, so perhaps it gives us a realistic idea on how the battle was like. Source B was also useful because analyzing the evidence we had of the battle, it seems that he is giving more of a factual statement than a opinion, making it more believable. This statement is also primary; it was from a seaman manning one of the boats of the minesweeper, Bill Elmslie. So seeing that he was in the middle of this all, it does look like he's trustworthy. I got a firm idea about how it was on the beaches by the way he writes: "I glanced back at the beach and saw a german fighter streak across the sand, his machine guns cutting through those columns of soldiers like reapers through corn", that really paints a realistic picture. ...read more.

If there were French or German accounts to back these up then it would have been more convincing. Also these sources don't tell me a lot, they give me snippets of what happened, they don't give me the build up to it, or the actual plans for the evacuation. I feel that all three sources were useful in their own respective way, because they gave me opinion, fact, and blatant government propaganda to boost morale. They do have their limitations but despite these I still get a few aspects of Dunkirk, the disorganization or as the commander called it "rabble". I would have liked to see more factual statements instead of opiniated ones; it would have been more convincing and reliable, because it could be backed up by statistics. Also a few German and French statements would really have backed up the events and given a more reliable account of the battle of Dunkirk. ...read more.