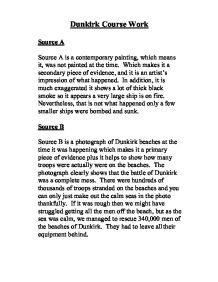 Dunkirk - Source A is a contemporary painting, which means it, was not painted at the time. Which makes it a secondary piece of evidence, and it is an artist's impression of what happened.

Dunkirk Course Work Source A Source A is a contemporary painting, which means it, was not painted at the time. Which makes it a secondary piece of evidence, and it is an artist's impression of what happened. In addition, it is much exaggerated it shows a lot of thick black smoke so it appears a very large ship is on fire. Nevertheless, that is not what happened only a few smaller ships were bombed and sunk. Source B Source B is a photograph of Dunkirk beaches at the time it was happening which makes it a primary piece of evidence plus it helps to show how many troops were actually were on the beaches. The photograph clearly shows that the battle of Dunkirk was a complete mess. ...read more.

They had no protection against aircraft's, tanks or anything else. In the photograph, you can see a vague image of a British navy ship or Even a German Frigate. Question two The battle of Dunkirk was a great Disaster and a great Deliverance according to source D line 2 to 3. For Example "But our men have gained immeasurably in experience of war-fare and in self-confidence" but then on the other hand it was a disaster as well because in source D line 2 "we have great losses in Equipment". It would be sufficient if they would show the actual figures. Because this would show it was a big disaster. There were also a lot of disasters along with deliverance's another Deliverance was Source E line 5 to 9 "Ships of all sizes dare the German guns under the guns of the British fleet. ...read more.

Deliverance but there is always a disaster aswell source E line 10 "First to return were the wounded". But I have found a lot more deliverance's than disasters for example source E line 13 "Cost to the enemy of the fleets intervention outside Dunkirk can be counted in the shattering of German advanced forces by navel guns. Survival of thousands of British troops whom Germans had hoped to capture or destroy". Source f line 6 "on June 3 the last men were moved. In all 338,226 men were brought back to England from Dunkirk of whom 139,997 were French. Another example is source F line 4 "Altogether 860 ships took part. As a further advantage the weather was uniformly benign". Plus source F line 8 "Almost the entire B.E.F were saved". So using all the evidence I have found I have been able to work out that the battle of Dunkirk was had more deliverance's than disasters. ...read more.