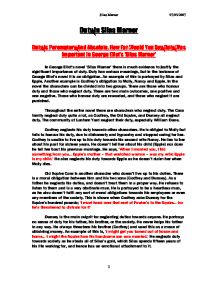 Duty In Silas Marner Duty Is Peremptory And Absolute. How Far Would You Say Duty Was Important In George Eliot's 'Silas Marner'

Duty In Silas Marner Duty Is Peremptory And Absolute. How Far Would You Say Duty Was Important In George Eliot's 'Silas Marner' In George Eliot's novel 'Silas Marner' there is much evidence to justify the significant importance of duty. Duty has various meanings, but in the instance of George Eliot's novel it is an obligation. An example of this is portrayed by Silas and Eppie. Another example is Godfrey's obligation to Molly, Nancy and Eppie. In the novel the characters can be divided into two groups. There are those who honour duty and those who neglect duty. There are two main outcomes, one positive and one negative. Those who honour duty are rewarded, and those who neglect it are punished. Throughout the entire novel there are characters who neglect duty. The Cass family neglect duty quite a lot, as Godfrey, the Old Squire, and Dunsey all neglect duty. The community at Lantern Yard neglect their duty, especially William Dane. Godfrey neglects his duty towards other characters. He is obliged to Molly but fails to honour his duty, due to dishonesty and hypocrisy and stopped caring for her. Godfrey is unable to live up to his duty towards his second wife Nancy. ...read more.

William Dane and the Lantern Yard community are also punished as they all disappear. However, there are also those characters in this novel that honour duty, and on the contrary are rewarded. Examples of these characters are the Lammeter family, Winthrop family, Silas himself and Eppie. Nancy and Pricilla are members of the Lammeter family and honour duty. From the Winthrop family Aaron and Dolly honour their duty towards others. The Lammeter family are persistently helping around in the community, and honour their duty. Nancy is a responsible woman and stands by her obligations. She fulfils her duty towards Godfrey, and her sister. She manages to be a dedicated wife and supports her husband, hence is able to fulfil her duty of being a wife. An example of this is when Godfrey tells her about Eppie. She doesn't react but on the contrary cooperates and supports Godfrey as she says, 'Godfrey, if you had told me this six years ago, we could have done some of our duty by the child.' Nancy is also obliged to Pricilla, as they are both sisters and treats her with respect. A prime example is shown during the preparation for the New Year's Eve party, as when the two sisters are getting dressed Nancy says, 'I must dress myself just like you.' ...read more.

He shows great sense of duty and honours it. Eppie is also another character who honours duty, especially to her father and never betrayed him. She changes Silas's life in many ways, and makes him a happy person. When Godfrey Cass comes along to claim her as he is her biological father, she refuses to leave Silas. She honours her duty towards her 'father,' 'I can't leave my father, nor anybody nearer than him... And he's took care of me and loved me from the first, and I'll cleave to him as long as he lives.' This is a great show of duty from Eppie. All these characters that have honoured duty are rewarded in various ways. Silas is rewarded as he retrieves all his gold, and is blessed with a family. Dolly is also rewarded as she gains respect. Eppie and Aaron are both rewarded in a similar way, as their reward is getting married to each other. In the novel 'Silas Marner' there is plenty of evidence to suggest duty is a major theme, even though it isn't very consistent. This is because Nancy is not rewarded and on the contrary can't have any children. Although the novel can be considered to be a 'fable' there are aspects of realism therefore it can be considered as a moral fairy tale. ?? ?? ?? ?? Silas Marner 07/05/2007 1 ...read more.