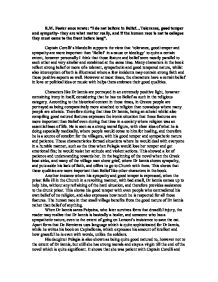 E.M. Foster once wrote: &quot;I do not believe in Belief...Tolerance, good temper and sympathy- they are what matter really, and if the human race is not to collapse they must come to the front before long&quot;.

E.M. Foster once wrote: "I do not believe in Belief...Tolerance, good temper and sympathy- they are what matter really, and if the human race is not to collapse they must come to the front before long". Captain Corelli's Mandolin supports the view that 'tolerance, good temper and sympathy are more important than 'Belief' in a cause or ideology' to quite a certain extent, however personally I think that those feature and belief were mostly parallel to each other and very similar and combined at the same time. Many characters in the book reflect strong belief or more of a tolerant, sympathetic and good tempered nature, whilst also interception of both is illustrated where a few incidents may contain strong faith and those positive aspects as well. However at most times, the characters have a certain belief in love or political idea or music with helps them embrace their good qualities. Characters like Dr Iannis are portrayed in an extremely positive light, however containing irony in itself, considering that he has no Belief as such in the religious category. According to the historical context in those times, in Greece people are portrayed as being comparatively more attached to religion than nowadays where many people are atheists. Therefore during that time Dr Iannis, being an atheist whilst also compiling good natured features expresses the ironic situation that those features are more important than Belief even during that time in a society where religion was an essential base of life. ...read more.

Her Belief is shown to be in love after Corelli shows up, and this makes her go on and therefore cherish even times in the war; however characters like her kept their good nature and Belief balanced. With all those features she benefits the society by becoming a doctor, and holding on to her moral values strongly, therefore showing importance. Therefore even at that time, she breaks the stereo typical image of women, and therefore achieves her dream with patience and tolerance of everything that happened to her and her loved ones. Therefore she shows patience not only to people around her, but to herself as well. However she is essentially shown to have good temper, with her goat unlike Dr Iannis, and people around her at times she gets frustrated, and is shown to become unstable but still tolerant at the same time. every character is a bit different form the other with a few different beliefs, which helps shape the meaning of the novel form a political and personal side, therefore showing us how themes can be interlinked. Carlo also is shown to have belief in love and Corelli therefore helping him in becoming a hero; however he incorporates all the positive features as well therefore causing interception. Even though he is different and therefore outlines theme of war, he manages to believe in the positive things in life and move on with his good nature, therefore it makes all those features mentioned and belief quite parallel at times, where both are the same, and related to each other. ...read more.

He also outlines the genre of romance and how it helped him get through the war and embraced his life, and his passion for music. The novel's language is at times quite crude when the soldiers are mentioned, however at other times when Dr Iannis speaks with his graceful manner and knowledge of Italian the reader can interact with different cultures in the book. De Bernieres creates a combination of events and small things which affect the book and perception of belief and the latter features. The political and romantic genre both combined express various views of belief and the positive features in the question, where at time both are seen as important whilst at other times the belief could be seen as a weak framework from the political side. The structure of the novel starts of calmly with a slight hint of danger and war, and therefore builds up from there, and therefore the characters build up. It is also expressed that political belief is more dangerous and less important than other beliefs such as love and joy, for instance Mandras dies a disgraceful death to regain his honour and due to his facist belief. This shows us that other beliefs such as love, music and joy, and also Dr Iannis who believed in morals were more important and therefore gained such feature such as good temper, tolerance and sympathy. Therefore they all gained these positive features with the help of their beliefs which combined to become more important through out the novel. ...read more.