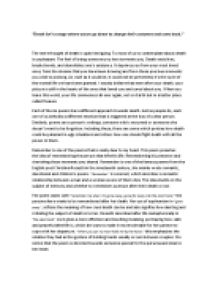 Each of the six poems has a different approach towards death. Just as people do, each one of us beholds a different emotion

﻿?Death isn?t a stage where actors go down to change their costumes and come back.? The mere thought of death is quite intriguing. To most of us to contemplate about death is unpleasant. The feel of losing someone you love torments you. Death ends lives, breaks bonds, and demolishes one?s existence. It deprives you from your most loved ones, from the dreams that you have been drawing and from those precious moments you wish to prolong. As cruel as it could be, it could not be prevented; it?s the cycle of the mortal life we have been granted. I stoutly believe that even after your death, your picture is still in the hearts of the ones that loved you and cared about you. When you leave this world, your life commences all over again, not on Earth but in a better place called Heaven. Each of the six poems has a different approach towards death. Just as people do, each one of us beholds a different emotion that is triggered at the loss of a dear person. Similarly, poems are a person?s writings, someone who?s mourned or someone who doesn?t want to be forgotten. Including these, there are some which portray how death could be pleasant in ugly situations and others how one should fight death with all the power in them. Remember is one of the poems that is really dear to my heart. This poem preaches the idea of remembering the person that left this life. Remembering his presence and cherishing those moments you shared. Remember is one of the famous poems from the English poet Christina Rossetti in the nineteenth century, she mainly wrote romantic, devotional and children?s poems. ?Remember? is a sonnet, which describes a romantic relationship between a man and a woman as one of them dies. The idea dwells on the subject of memory and whether to remember a person after their death or not. ...read more.

Even though they are weak and losing their sight they can still use what strength they have to rage against death. While searching for poems speculating about death, this very poem caught my eyes. Reading throughout the poem I realised how the poet has used plenty of imagery which added to the atmosphere and effectiveness of the poem. Especially in the first stanza, ?In the darkness of the night? the opening the poet has used reveals a great deal of the setting of the poem and also gives you a gloomy and a menacing sensation. The persona in the poem asserts he?s seen the angel of death, and demonstrates the fear he has gone through. The poet here used another effective imagery ?The summer?s heat became a chill? right after, ?he was looking at me? which gives the impression that it became cold and thus summarizing the feeling of the character right after he saw the angel of death. Coupled with imagery, the poet uses personification in ?my heart skipped a beat with the fright.? In other words the poet wants to emphasize how the persona was petrified. Likewise it also persuades the reader to fear alongside the character. Another tool the poet uses is the repetition of the line ?The angel of death at his kill?. This specific line sticks to the readers? minds and adds to the poem?s structure as it emphasizes how the persona is near to death, and how the angel of death is ready to pounce on its prey anytime. The first stanza portrays how the persona does not want to be a slave to the angel of death and how fears captivate his soul the moment their eyes meet. Yet he glanced again and knew the angel is gone ?Parted he my comp'ny?, he felt a sudden rush of relief that this angel wasn?t calling for his death ?My chest was quickly pounding still?. ...read more.

The mother?s persistence of keeping her child calm and not making him feel that his end is approaching was her aim. But she could not lie to herself long, ?she had bathed him and rubbed him down with bare palms? in preparation for his death. Chinua also uses imagery in ?unwashed children with washed-out ribs and dried- up bottoms?, this reflects how revolting experiences the refugees go through. Similarly he points of ?odours of diarrhoea?, to scheme the exact drastic picture he has witnessed. At the end of the poem, a sad picture is revealed of the mother ?putting flowers on a tiny grave?. No mother should behold such a memory of her child, dying in her arms, and there is nothing in her hands that she could do. Still she did not surrender; she held him in her arms till the very last minute. And believed that she and her little one and will be rebounded in after death. Taking everything into account, coping with death is not easy, but death its self isn't scary, it?s a finality you'll never know happened when it?s your turn. A person?s death is only something that the loved one's they leave behind experience. Have you ever thought what will your route to death be? In some of the poems listed, the route to death of each of the persona was different, the mother was in pain and agony while the old lady was lonely and abandoned. We all are going to have to confront death eventually, although no one can predict the course to his or her death, yet we can decide the course of our lives. Live and appreciate each moment with your loved ones as if it were your last. Make your life worth living as it?s the only memory you take with you, since death is an appointment we must all keep and for which no time is set. ...read more.