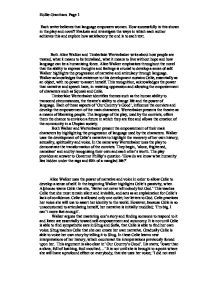 Each writer believes that language empowers women. How successfully is this shown in the play and novel? Evaluate and investigate the ways in which each author achieves this and explore how satisfactory the end is to each text.

Each writer believes that language empowers women. How successfully is this shown in the play and novel? Evaluate and investigate the ways in which each author achieves this and explore how satisfactory the end is to each text. Both Alice Walker and Timberlake Wertenbaker write about how people are treated, what it means to be brutalised, what it means to live without hope and how language can be a humanising force. Alice Walker emphasises throughout the novel that the ability to express thoughts and feelings is crucial to develop a sense of self. Walker highlights the progression of narrative and articulacy through language. Walker acknowledges that existence to this development sustains Celie, essentially as an object, with no power to assert herself. This recognition, acknowledges the power that narrative and speech have, in resisting oppression and allowing the empowerment of characters such as Squeak and Celie. Timberlake Wertenbaker identifies themes such as the human ability to transcend circumstances, the theatre's ability to change life and the power of language. Each of these aspects of 'Our Country's Good', influence the convicts and develop the empowerment of the main characters. Wertenbaker presents the theatre as a means of liberating people. The language of the play, used by the convicts, offers them the chance to envision a future in which they are free and allows the creation of the community in a Utopian society. ...read more.

Throughout the novel, Walker proves that sexuality is not as simple as we may believe. Nettie, however provides a balance as a women who finds her identity and asserts herself without becoming like a man. Timberlake Wertenbaker uses Ralph to show how men can be empowered by women. Ralph shows large amounts of respect and appreciation of Alicia; 'Oh my dear women...' and ' Don't speak her name on this iniquitous shore.' Wertenbaker exercises Alicia's power over Ralph, by withholding her language, and therefore not allowing any reciprocation of love. This highlights Ralph's love as being one sided and creates a sense of worship. Throughout 'The Color Purple', the power of strong female relationships is apparent. Walker portrays female friendships as a means for women to summon the courage to tell stories. These allow women to resist opposition and dominance. Nettie's relationship with Celie, anchors her through years of living in Africa. Most importantly, Celie's ties to Shug bring about Celie's gradual attainment of a sense of self. Walker wishes to emphasise the power of relationships among women that provide a reciprocal love. As Shug's relationship with Celie develops, Shug fills the role of mother, sister, lover and friend, and therefore propels her own empowerment further still. Walker demonstrates, that despite Shug's unpredictable nature and shifting roles, Shug's loyalty and compassion ensures that she remains Celie's most constant friend. ...read more.

Alice Walker unites the characters; '...me and Nettie and Shug and Albert and Samuel and Harpo and Sofia and Jack and Odessa...And us so happy.' This provides the audience with a fitting resolution to the text and puts an end to the brutality and harsh treatment in 'The Color Purple'. Timberlake Wertenbaker creates a problem with what exactly the convicts have achieved by the end of the play. On one hand, the convicts eventually achieve their own sense of self, and become valuable members of the Australian colony, but this suggestion is ominous and it may be safer to say that the convicts merely accepted a dominant discourse of speech, which developed their articulacy and temporarily empowered themselves. However I find the ending satisfactory to the text, due to the sentimental justification of theatre as a means of empowering people. Both Alice Walker and Timberlake Wertenbaker use the power of language to empower the women in the texts. Walker and Wertenbaker both argue that the empowerment of women is possible through the establishment of ones own voice and that sustaining this language is vital in obtaining a sense of self. Both the authors successfully show that language empowers women, by highlighting the progression of their empowerment, as they are influenced to develop their language. Through this progressive structure of the novel and play, a satisfactory end is deduced, which brings about a sense that the women have established their own language, which in turn leads to their empowerment. Hollie Grantham. Page 1 ...read more.