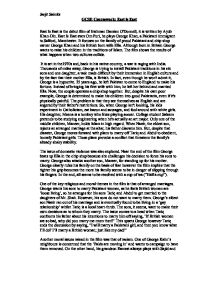 East Is East is the debut film of Irishman Damien O'Donnell, it is written by Ayub Khan-Din. East Is East stars Om Puri, he plays George Khan, a Pakistani immigrant to Salford, Manchester. It focuses on the family of proud Pakistani and chip shop owner George Khan and his British born wife Ella. Although born in Britain George wants to raise his children in the traditions of Islam. The film shows the results of what happens when two cultures collide. It is set in the1970s and, back in his native country, a war is raging with India. Thousands of miles away, George is trying to install Pakistani traditions in his six sons and one daughter, a task made difficult by their immersion in English culture and by the fact that their mother Ella, is British. ...read more.

When Nazir, the eldest son, rejects an arranged marriage at the altar, his father disowns him. But, despite that disaster, George moves forward with plans to marry off Tariq and Abdul to obedient, homely Pakistani girls. Those plans provoke a conflict that threatens the family's already shaky stability. The issue of domestic violence was also explored. Near the end of the film George beats up Ella in the chip shop because she challenges his decision to force his sons to marry. George also attacks another son, Maneer, for standing up for his mother. George clearly rules his family on the basis of fear however the film implies that the tighter his grip becomes the more his family seems to be in danger of slipping through his fingers. ...read more.

I'll marry a British woman; just like my dad!" Another moral issues raised in the film was that of racism. One of George Kahn's neighbours is concerned that the 'Pakis are moving in' and wants to campaign to have them removed. On the other hand, his grandson Earnest always plays with Sajid and always greats George with an Arabic greeting, whilst his granddaughter Stella is having a 'relationship' with Tariq. East Is East is about cultural differences and the difficulties of integration. It's about the dangers of losing one's unique identity when leaving behind one country for another. Above all, however, it's about family dynamics, and how children inevitably rebel against their parents' beliefs and traditions - that's how they grow and become independent. East is East has many serious issues but covers them up brilliantly with classic comedy moments! A brilliant film. Jasjit Saimbi GCSE Coursework: East is East ...read more.