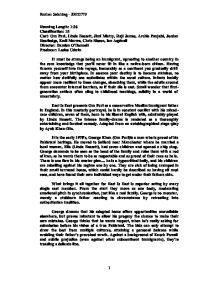 Running Length: 1:36 Classification: 15 Cast: Om Puri, Linda Bassett, Jimi Mistry, Raji James, Archie Panjabi, Jordan Routledge, Emil Marwa, Chris Bisson, Ian Aspinall Director: Damien O'Donnell Producer: Leslee Udwin It must be strange being an immigrant, uprooting to another country in the sure knowledge that you'll never fit in like a native-born citizen. Having thrown yourself into this voyage, inexorably as a continent you gradually drift away from your birthplace. In essence your destiny is to become stateless, no matter how dutifully one assimilates within the novel culture. Infants luckily appear more resilient to these changes, absorbing them, while the adults around them encounter internal barriers, as if their die is cast. Small wonder that first-generation settlers often cling to childhood teachings, solidity in a world of uncertainty. East Is East presents Om Puri as a conservative Muslim immigrant father in England. In this masterly portrayal, he is in constant conflict with his mixed-race children, seven of them, born to his liberal English wife, admirably played by Linda Bassett. The intense family-drama is rendered as a thoroughly entertaining and farcical comedy. Adapted from an autobiographical stage-play by Ayub Khan-Din. ...read more.

while little Jordan Routledge is great as the parka-loving Sajid. However, it's Puri who shines as the complex father, desperately trying to hang on to tradition and finding nothing but rebellion from his family. Among the notable dramatic scenes is the eldest son's defiance of running away in the middle of the ceremony of his marriage with a bride he hasn't seen before--chosen by his father. The outraged father removes his wall-photograph from the family set and declares him dead. Later, the son is shown leading a gay lifestyle in London. The second son is carrying on prolonged smooching sessions with a young neighborhood blonde--she in defiance of her prejudiced father. The third son is docile except when the father pushes the two boys also into accepting arranged marriages with a pair of unattractive Paki sisters chosen by him and a Muslim priest: "I'm not marrying a fing Pakistani!" The fourth son defies the father by surreptitiously enrolling in fine arts instead of his father's prescribed engineering studies. The son brings home his college project: a life-like plastic sculpture of female genitalia and pubic hair. The fifth son is shown reading the Koran, dutifully wearing an Islamic white skullcap. ...read more.

The children may be defined by stereotypes, but they're fleshed out as real people; and it also helps that the surrounding cast is full of scene-stealers like Nicol as the neighbour who says exactly what she means. Director O'Donnell maintains a breezy tone from start to finish, despite the serious stuff that's going on. And it does feel a bit TV sitcom-ish as it shifts to deliver its Important Life Lesson. But full credit to Khan-Din, who has avoided all the usual stage-to-film pitfalls to turn his play into a terrific movie packed with vivid, memorable characters and situations. And a truly Important Life Lesson too. Fundamentally East Is East is a film about tolerance for views that rub against your own. It shows how George, unable to channel frustration constructively, boils over into violence; a reaction against his nature but realistic in context. It also shows how Ella is torn between her love for George and her desire to protect and encourage their children, another difficult position. The charm of East Is East is its sympathy to the characters and their divisions, to the reality that great emotional resolutions do not in practice occur. Superb ensemble acting by the small-name cast ensures that you're gripped from beginning to end by their full, warm performances. Rezhan Salehbag - 30052779 1 ...read more.