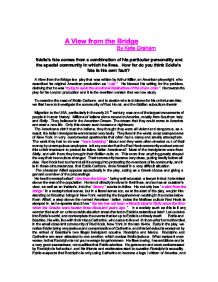 A View from the Bridge By Kate Graham Eddie's fate comes from a combination of his particular personality and the special community in which he lives. How far do you think Eddie's fate is his own fault? A View from the Bridge is a play that was written by Arthur Miller, an American playwright, who described its original American production as 'cold '. He blamed his writing for the problem, claiming that he was 'trying to avoid the emotional implications of the characters '. He rewrote the play for its London production and it is the rewritten version that we now study. To examine the case of Eddie Carbone, and to decide who is to blame for his unfortunate fate, we first have to investigate the community of Red Hook, and the Sicilian subculture therein. Migration to the USA, particularly in the early 20th century, was one of the largest movements of people in human history. Millions of Italians alone moved to America, mostly from Southern Italy and Sicily. They believed in the American Dream. The dream that they could come to America and start a new life. Only this dream soon became a nightmare. The Americans didn't trust the Italians, they thought they were all violent and dangerous, as a result, the Italian immigrants were treated very badly. They lived in the worst, most cramped area of New York, in very overcrowded apartments that often had a damp and smelly atmosphere. The work they had to do was ' back breaking ' labour and they were often cheated out of their money by unscrupulous employers. Is it any wonder that the Red Hook community evolved around this unfair treatment to protect its fellow Italian Americans? Most of the immigrants were from Sicily, and with them they brought their Sicilian culture. This more than anything greatly shaped the way their new culture changed. ...read more.

Eddie started to panic, and told Catherine to get all the illegal immigrants out of the house. He blames this on the other two men in the upstairs apartment, claiming that Lipari, the American relative they were staying with, has enemies, 'which they'd love to stab him in the back '. Eddie starts to get worried about whom Lipari and his family might blame. It is certain that he is worried he may become the next Vinny Balzono, rejected by his own family, for one of the worst social 'crimes' someone living in the small Sicilianised area of Red Hook can commit. He is worried that Lipari will 'blame you or me ' and that he, Catherine and Beatrice will have 'his whole family ' after them to avenge the deportation of their relatives. He then goes on to substantiate his fear by telling Catherine 'They got a temper that family '. Alas, for poor Eddie, he was too late. The immigration bureau arrived and Marco, who knew of the unspeakable tension between Eddie and Rodolpho correctly guessed that it was Eddie who had 'snitched '. Eddie denied that he had told the bureau about the two brothers but Marco temporarily liberated himself from the mauling hands of the two officers who were trying to bundle him into the van and spat in Eddie's face, in front of the whole neighbourhood. Eddie pounced at Marco, and Eddie, who couldn't look guilty in front of the neighbourhood, for fear of following in Vinny's footsteps, (only worse for he does not have the excuse of being young and inexperienced to partly excuse his actions), had to retaliate. He threatened Marco, but this was not enough to desuade Marco from accusing Eddie again, as he already knew he did not need to be afraid of him as he was stronger than Eddie. Lipari and his wife watched this public display with interest. ...read more.

The stage directions and dialogue are used excellently tp leave us in no doubt as to what the characters are actually feeling. The stage directions were useful, as they were able to give us the important bits of information we needed to see, that speech could not. Upon examination, I feel that although the other characters do play a part in Eddie's premature death, the blame must lie mostly with Eddie himself. The community does, in my opinion, play the second largest part, by putting so much pressure on the individuals that live within it, not to involve the law in its affairs, (mostly because of the way the American law had treated the Italians when they first arrived in America), and especially not to ' snitch ' on your own family. Their homesickness for Italy resulted in the community supporting others when they came into the country, and the most pressure put on people was not to inform the immigration bureau of any illegal immigrants that may be staying in their community. The penalties for this offence we have already seen, when a 14-year-old boy, (Vinny Bolzano), was thrown down three flights of stairs by his own father and brothers, disowned by his family and spat on in the street. Eddie himself called Vinny ' crazy ' and remarked on how after doing something like that a man couldn't ' show his face ' again in the community of Red Hook. It is Eddie's belief in this way of life, this community justice that ultimately destroys him. It is because of his opinions about the law, and what should happen to people who ' snitch ' that Eddie could not back down to Marco, especially in front of the whole neighbourhood. Eddie's death is the fault of the community for instilling these beliefs into Eddie, but the actual blame has to lie with the late Mr. Eduardo Carbone for taking the unwritten laws of the community so seriously, that he would rather die, than admit to breaking them. ...read more.