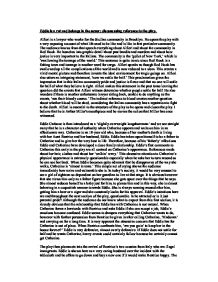 Eddie is a rat and belongs in the sewer; discuss using reference to the play.

Eddie is a rat and belongs in the sewer; discuss using reference to the play. Alfieri is a lawyer who works for the Sicilian community in Brooklyn. He opens the play with a very exposing account of what life used to be like and is like in that particular community. The audience knows from that speech everything about Alfieri and about the community in Red Hook. He launches into graphic detail about past bandits and murders and about how justice is very important to the Italians. The community is the 'gullet of New York,' which is 'swallowing the tonnage of the world.' This sentence is quite ironic since Red Hook is a fishing town and tonnage is another word for cargo. Alfieri speaks as though Red Hook has swallowed up all the complications of the world and is now reduced to a slum. This creates a vivid mental picture and therefore invents the ideal environment for tragic goings on. Alfieri also utters an intriguing statement, 'now we settle for half.' This proclamation gives the impression that in this Italian community pride and justice is fierce and that no one will settle for half of what they believe is right. Alfieri makes this statement in the past tense leaving the question did the events that Alfieri witness determine whether people settle for half. He also wonders if there is another unfortunate lawyer sitting back, unable to do anything as the events, 'run their bloody course.' The indirect reference to blood creates another question about whether blood will be shed, considering the Italian community has a reputation to fight to the death. Alfieri is essential to the structure of the play as he opens and closes the play. I believe that he is Arthur Miller's mouthpiece and he moves the action that Miller has once witnessed. Eddie Carbone is then introduced as a 'slightly overweight longshoreman' and we see straight away that he is a character of authority when Catherine appears and waits on him in an affectionate way. ...read more.

He is painting his character. Beatrice's creates peace and asks Marco about his family. Eddie, pouring oil onto the fire states that some women are unfaithful while their husbands are off earning money. Surprisingly for Eddie, Rodolpho says that life is strict in Italy and Eddie rises to the occasion. Eddie retaliates with the comment that it is also strict here and he does not like Rodolpho bringing Catherine back so late. Marco gives in to Eddie's power, trying to create peace between the two. There is now an air of tension and suppressed rivalry in the room. Catherine at this point is sick and tired of the person she loves being denounced in such a way. She therefore challenges Eddie's authority in asking Rodolpho to dance. Eddie simply freezes and carries on attacking Rodolpho by asking him to box. In this way, Eddie was putting Rodolpho to a sick test. Eddie was wondering if Rodolpho were actually going to hit him. Marco was quiet throughout the whole boxing scene and when it was finished, Catherine and Rodolpho started dancing again. Marco then challenged Eddie to his own kind of test. When Eddie fails to pick up a chain by one leg, Marco does it exposing his full strength. Although this action was done without any words, Eddie knew what Marco was signalling. Eddie had gone too far and Marco was protecting his baby brother. Marco, who was normally a quiet, self-contained and polite figure, was now questioning Eddie's authority because Eddie had violated his. The Italian passion for justice comes through again as Marco violently protects his brother. Marco had arisen and with great strength, everyone was now questioning Eddie's authority. In the next act, Alfieri states that because a crate of wine 'accidentally' fell off a ship Eddie was likely to come home drunk. Another warning. In this next scene, Catherine and Rodolpho show their love for each other through words and they talk about Eddie. ...read more.

He is very brave to be able to stand up and sing 'Paper Doll' to three people whom he met ten minutes ago. The words of 'Paper Doll' are very provocative and Catherine loves the music and falls through the hole of love for this man. He came to the States with a very open-ended attitude and with the prospect of fulfilling his dreams. This annoys Eddie because he is not realistic. Marco is the most conservative at the beginning. He is very concerned for his family back in Italy and he wants to start work straight away so that he can send money home. Eddie almost admires him and reassures himself that he would do the same for Catherine if he were in Marco's position, which he thankfully was not. If Eddie had managed to get Catherine, it would have been unnatural and ridiculous. Beatrice notices the relationship but her unwillingness to speak out makes her part of the problem. The reason why Eddie betrayed his wife's cousins is that he loved Catherine so much. However, even Eddie Carbone could not stand in the way of fate. Rodolpho and Catherine were meant to be together and no amount of vigorous and passionate arguing could stop fate from running its natural course. The doom in this play starts at the very beginning with Eddie's outward and awkward feeling for Catherine, when he claims her as his own. The prospect of dooms mounts as the play goes on, but the main factor is that the play is about incestuous love, jealousy and betrayal. When these are combined with an underprivileged, passionate Italian way of life, the results are harsh. This does not necessarily mean that Eddie should be called a rat. He cannot help but feel the way he does for Catherine, however he does not treat anybody with the respect they deserve. I feel that the final incident where Eddie attacked Marco with a knife was a defining point; it displayed his cowardice and showed that Eddie is a rat and belongs in the sewer. ...read more.