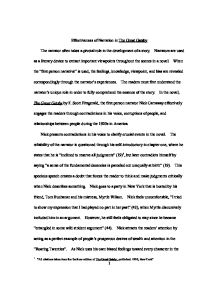 Effectiveness of Narration in The Great Gatsby

Effectiveness of Narration in The Great Gatsby The narrator often takes a pivotal role in the development of a story. Narrators are used as a literary device to extract important viewpoints throughout the scenes in a novel. When the "first person narrative" is used, the feelings, knowledge, viewpoint, and bias are revealed correspondingly through the narrator's experiences. The readers must first understand the narrator's unique role in order to fully comprehend the essence of the story. In the novel, The Great Gatsby by F. Scott Fitzgerald, the first person narrator Nick Carraway effectively engages the readers through contradictions in his voice, corruptions of people, and relationships between people during the 1920s in America. Nick presents contradictions in his voice to clarify crucial events in the novel. The reliability of the narrator is questioned through his self-introductory in chapter one, where he states that he is "inclined to reserve all judgments" (19)1, but later contradicts himself by saying "a sense of the fundamental decencies is parceled out unequally at birth" (19). This specious speech creates a doubt that forces the reader to think and make judgments critically when Nick describes something. Nick goes to a party in New York that is hosted by his friend, Tom Buchanan and his mistress, Myrtle Wilson. Nick feels uncomfortable, "I tried to show my expression that I had played no part in her past" (43), when Myrtle discursively included him in an argument. ...read more.

Nick describes Myrtle's footsteps: "sweep[ing] into the kitchen, implying that a dozen chefs awaited her orders there" (41) as she arrogantly walks across the room. Not only Myrtle's change of behavior is depicted as shallow, many others are also described in the same sense. "[Catherine] came in with such a proprietary haste and looked around so possessively at the furniture that I wondered if she lived here" (40). Nick hypocritically disparages Catherine to cement the superficial characteristics in people attending this party. These criticisms bring the readers to Nick's point of view to judge with the overall impression given. As a narrator with strong curiosity, Nick stays at the party until Tom gets angry and breaks Myrtle's nose. "There were bloody towels upon the bathroom floor and women's voices scolding, and high over the confusion a long broken wail of pain" (45) is the melodramatic scene described by Nick. This debased scene suggests that such relationships have no real values and no sense of respect to pompous men such as Tom. Furthermore, one of the other guests, Mr. McKee and Nick turned their back to the scenery of "Catherine scolding and consoling as they stumbled here and there among the crowd of furniture with articles of aid" (45). Men in the party showed no sign of sympathy towards Myrtle. ...read more.

Nick remarked Gatsby "spoke as if Daisy's reaction was the only thing that mattered" (126). Nick then immediately followed with a disgusted statement: "I disliked him so much by this time" (126). Nick expresses disapproval towards Gatsby once again later, "I disapproved of him from beginning to end" (134), which contradicts with Nick's description of Gatsby in the beginning, "I could see nothing sinister about him" (55). This suggests that Nick's impression of Gatsby taint the moment Gatsby shows his strong devotion for Daisy. The readers are encouraged to see the weaknesses between Nick and Gatsby's friendship. These weaknesses clarify the distinct changes in Nick's attitude and they draw readers to notice the significant differences between the two men in both their values and priorities. Through Nick's affiliations with other people, the readers are presented with insightful details about the story. The Great Gatsby is often described as a quintessential American novel. One of its successes is the use of Nick Carraway as a narrator. Nick describes himself using the word "brooding", which compliments with the eyes of the "God-like observant" Doctor T. J. Eckleburg, which "brood on over the solemn dumping ground" (35). This sets Nick seemingly superior to others, yet he is portrayed as a mere observant who seems as guilty as others. Nick is carefully chosen by F. Scott Fitzgerald to reveal corruptions, contradictions, and relationships in this novel. His emotions, relationships and imaginations are brought out with the context to fully direct readers' attention. ...read more.