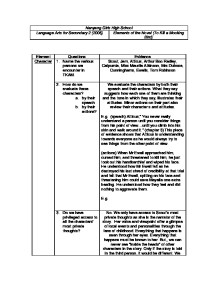 Elements of the Novel (To Kill a Mocking Bird)

Nanyang Girls High School Language Arts for Secondary 2 (2005) Elements of the Novel (To Kill a Mocking Bird) Element Questions Evidence Character 1. Name the various persons we encounter in TKAM. Scout, Jem, Atticus, Arthur Boo Radley, Calpurnia, Miss Maudie Atkinson, Mrs Dubose, Cunninghams, Ewells, Tom Robinson 2. How do we evaluate these characters? a. by their speech b. by their actions? We evaluate the characters by both their speech and their actions. What they say suggests how each one of them are thinking and the tone in which they say, illustrates their attitudes. Minor actions on their part also review their character s and attitudes. E.g. (speech) Atticus," You never really understand a person until you consider things from his point of view...until you climb into his skin and walk around it." (chapter 3) This piece of evidence shows that Atticus is understanding towards everyone as he would always try to see things from the other point of view. (actions) When Mr Ewell approached him, cursed him, and threatened to kill him, he just took out his handkerchief and wiped his face. He understood how Mr Ewell felt as he destroyed his last shred of credibility at that trial and felt that Mr Ewell, spitting on his face and threatening him could save Mayella one extra beating. ...read more.

As the story goes on, Jem becomes moody, is less willing to join in games with Scout and Dill which he used to love. He prefers to be alone and is milder temper than Scout, more sensitive to other people. He learns a lot about personal courage. His awareness of the feelings of others increases and he finally understands that Boo Radley stays indoors because he wants to. Jem also developed a keen sense of responsibility, which is shown when he informs Atticus of Dill's presence at the Finch house. He becomes more protective towards his sister and develops tactfulness and a way with words just like Atticus. -Arthur Boo Radleyis a figure of fear and mystery at the beginning of the story. People believed that he is a murderer and a thief. Boo emerges as a very different sort of person frm the one the children imagine him to be. He leaves them gifts in the tree hole, mended Jem's pants, covers Scout with a blanket durin the fire and comes to Scout and Jem's aid when they are attacked my Bob Ewell, even though this involves him in killing a man with a knife. ...read more.

* Are there examples when the narrator knows what could not be known by naturalistic means * Are there examples when the narrator interrupts the novel's action to express opinions about the book's events and characters? Yes E.g. � Scoout narrates in the first person, telling what she saw and heard at the time and augmenting this narration with thoughts and assesments of her experiences in retrospect. Although she is by no means an omniscient narrator, she has matured considerably over the intervening years and often implicitly and humorously comments on the na�vet� she displayed in her thoughts and actions as a young girl. Scout mostly tells of her own thoughts but also devotes considerable time to recounting and analyzing Jem's thoughts and actions. If you answered 'no' to the above, would you consider the narrator in TKAM to be an 'impersonal or objective narrator'? Setting Briefly describe the following in which the action of TKAM occurs. : * Location, Time, Circumstances The basic time setting is in the South during the early twentieth century (1930s). Due to the Great Depression, poverty is a subject that affects many. Instead of using this as a binding theme, the people in the town use it as an element of separation. Prejudice of every sort runs rampant throughout the town, and even though things are simply "not fair", the time frame has to be remembered. ...read more.