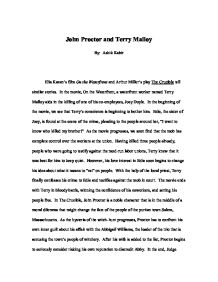 John Proctor and Terry Malloy By: Ashik Kabir Elia Kazan's film On the Waterfront and Arthur Miller's play The Crucible tell similar stories. In the movie, On the Waterfront, a waterfront worker named Terry Malloy aids in the killing of one of his co-employees, Joey Doyle. In the beginning of the movie, we see that Terry's conscience is beginning to bother him. Edie, the sister of Joey, is found at the scene of the crime, pleading to the people around her, "I want to know who killed my brother!" As the movie progresses, we soon find that the mob has complete control over the workers at the union. Having killed three people already, people who were going to testify against the mod-run labor unions, Terry knew that it was best for him to keep quiet. However, his love interest in Edie soon begins to change his idea about what it means to "rat" on people. ...read more.

After already telling her that he had absolutely nothing to do with it, the fact that he, himself, had actually aided in killing him, shocked her. Also, by confessing, he was called the "rat" and lost respect amongst his friends. Of course, he later gains their respect when he faces the mob during the climax of the movie. By confessing, he not only delivered to Edie the murderers of her brother, but he also aroused the opportunity of to gain freedom for his coworkers. In The Crucible, Proctor had to confess to his wife that he had indeed committed adultery, even though she already knew. In Puritan times, Adultery was highly offensible. Not only would this most likely ruin his marriage, but it would also ruin his reputation in the town. Furthermore, later in the play, Proctor has to deal with the choice of choosing to confess and live, or to sign a confession that would be posted for the town to see. ...read more.

He wasn't a bad kid, that Joey. As one can see, his job was to merely lead the guy onto the rooftop so they could "lean on him a little bit". However, the mobsters had other plans. With the love interest in Edie and the pressure to do what was right by the reverend, Terry decided to do what he thought was best. As with Proctor, his adulterous affair with Abbigail was intentional. He himself committed the crime that made it harder for him to discredit her. Furthermore, by continually lying to his wife, he further damaged his relationship with her. The difference in slight, but very clear. Both stories have a greater meaning hidden in them. Both were made to show how the Mccarthy's Era affected people. In Arthur Miller's, The Crucible, hysteria, propaganda, and fear bled throughout the pages. At the same time, Kazan's On the Waterfront gave some of the reasons as to why it was difficult to do what was pure...to do what was right. As complex as both situations were at the time, they frightenly depicted what was happening in real life. ...read more.