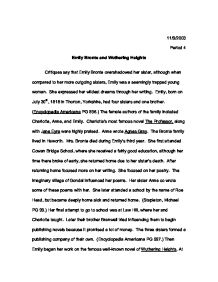 11/9/2003 Period 4 Emily Bronte and Wuthering Heights Critiques say that Emily Bronte overshadowed her sister, although when compared to her more outgoing sisters, Emily was a seemingly trapped young woman. She expressed her wildest dreams through her writing. Emily, born on July 30th, 1818 in Thorton, Yorkshire, had four sisters and one brother. (Encyclopedia Americana PG 596.) The female authors of the family included Charlotte, Anne, and Emily. Charlotte's most famous novel The Professor, along with Jane Eyre were highly praised. Anne wrote Agnes Gray. The Bronte family lived in Haworth. Mrs. Bronte died during Emily's third year. She first attended Cowan Bridge School, where she received a fairly good education, although her time there broke of early, she returned home due to her sister's death. After returning home focused more on her writing. She focused on her poetry. The imaginary village of Gondal influenced her poems. Her sister Anne co wrote some of these poems with her. She later attended a school by the name of Roe Head, but became deeply home sick and returned home. (Stapleton, Michael PG 99.) Her final attempt to go to school was at Law Hill, where her and Charlotte taught. Later their brother Branwell tried influencing them to begin publishing novels because it promised a lot of money. The three sisters formed a publishing company of their own. (Encyclopedia Americana PG 597.) Then Emily began her work on the famous well-known novel of Wuthering Heights. ...read more.

(Critical Essays on Emily Bronte PG 8.) Emily beheld three main beliefs. One; that Hell exists only on earth, and no souls suffer torments after death, two; A soul that has suffered sufficiently on earth attains its heaven, Three; A soul that has not suffered is in limbo for a time, but is redeemed by others' sufferings if not by its own, after enduring the poena damni, deprivation of the desired heaven. (Critical Essays on Emily Bronte PG 9.) These "rules" are often reflected in Wuthering Heights. With Catherine, she does not go to either Heaven nor Hell, but remains on earth by the wish of Heathcliff, and states herself in the novel she deserves no Heaven. The only time she achieves heaven is when Heathcliff dies and they are once again united, even if it may not be in actual heaven. Emily also refers to Heathcliff as the devil. (Critical Essays on Emily Bronte pg13.) When Mr. Earnshaw returns home from a trip, he brings with him a boy, "...you must e'en take it as a gift from God, though it's as dark almost as if it came from the devil." (Pg 40 of Wuthering Heights) Referring to him, as a devil, but yet a gift from God is actually quite complex. It utters Heathcliff's two personalities, as God, his undying love for Catherine and his ability to control people. With his ability to manipulate a situation, he also portrays devil like qualities. ...read more.

She was the only child out of six to be given a middle name. It seems as if her parents knew she would be different. She was a very quiet person who kept to her self. And when her own sister came upon her poems she was furious. (Pyckett, Lyn PG 8.) During her life she experienced a lot of death. Death is also a main factor dealt with in Wuthering Heights. The amount of characters was cut in half by the end of the book. It also reflects the time period where people all died much earlier than they do today. Wuthering Heights was written towards the end of Emily's life. Which may be the reason the story has no theme of hope. Emily knew she was going to die, and did not want a doctor to be called in her last hours. (Critical Essays on Emily Bronte PG 51.) She was also in a state of delusion. Probably living out the lives of her characters in her dreams. Wuthering Heights only has two main settings, Wuthering Heights and Thrushcross Grange. This portrays an example of how Emily felt trapped in her own home. She wrote to venture out. She had no love of her life yet wrote one the most passionate stories ever. In conclusion Emily's experiences, her feelings of being alone, the characteristics of her family members, and her relationship with God, all affected the outcome of Wuthering Heights. Using her religion in her novel allows you to connect with her. It could not have been written the same by any other person; because only she beheld these imaginative believes. ...read more.