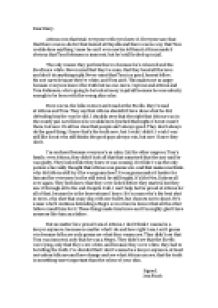 ﻿Dear Diary, Atticus won that trial: everyone with eyes knew it. Everyone saw that that there was no doctor that looked at Mayella and there was no way that Tom coulda done anything ?cause he can?t even use his left hand. Atticus made it obvious that Tom Robinson is innocent, but he?s still locked up in jail. The only reason they put him there is because he?s coloured and the Ewells are white. Never mind that they?re scum, that they bend all the laws and don?t do anything right. Never mind that Tom is a good, honest fellow. No one cares because they?re white, and Tom ain?t. This makes me so angry because everyone knows the truth but no one cares, ?cept me and Atticus and Tom Robinson, who?s going to be locked away in jail all because he was unlucky enough to be born with the wrong skin color. ...read more.

They don?t always do the good thing. I know that?s the truth now, but I wish I didn?t. I wish I was still like Scout who still thinks the good guys always win, but now I know they don?t. I?m confused because everyone?s so calm. Cal, the other negroes, Tom?s family, even Atticus, they didn?t look all that that surprised that the jury said he was guilty. They looked like they knew it was coming. I feel like I was the only person who really thought that Atticus was gonna win. And that makes me think-why did Atticus still try if he was gonna lose? It was gonna make it harder for him and for everyone; but he still tried; he still fought. ...read more.

These things make him brave and I?m mighty glad I have someone like him as a father. But no matter how proud I am of Atticus, I don?t think I wanna be a lawyer anymore, because no matter what I do and how right I am, I ain?t gonna win because folks are only gonna see what they wanna see. They didn?t see that Tom was innocent, only that he was a Negro. They didn?t see that the Ewells were lying, only that they were white, and because they were white, they had to be telling the truth. I?ve decided that I don?t wanna be a lawyer anymore, at least not unless folks around here change and see what Atticus can see, that the truth is something more important than the colour of your skin. Signed, Jem Finch ...read more.