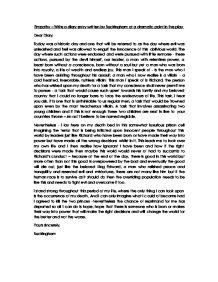 Empathy - Write a diary entry written by Buckingham at a dramatic point in the play Dear Diary, Today was a historic day and one that will be referred to as the day where evil was unleashed and hell was allowed to engulf the innocence of this oblivious world. The day where such actions were endorsed and were pursued with little remorse - these actions, pursued by the devil himself, our leader, a man with relentless power, a beast born without a conscience, born without a soul but yet a man who was born into royalty, a life of wealth and endless joy. ...read more.

This task, I hear you ask, it is one that is unthinkable to us regular men, a task that would be frowned upon even by the most treacherous villain. A task that involves assassinating two young children and if this is not enough these two children are next in line to your countries throne - An act I believe to be named regicide. Nevertheless - I lay here on my death bed in this somewhat luxurious prison cell imagining the terror that is being inflicted upon innocent people throughout this world by leaders just like Richard who have been born or have made their way into power but have made all the wrong decisions whilst in it. ...read more.

him but if the human race is to survive as it should do then the overriding population needs to be like this and needs to fight evil and overcome it too. I stand strong throughout this period of my life, where the only thing I can look upon is the occurrence of my death. And I can only imagine what I could of became had I agreed to kill the two princes -Nevertheless the chance of reprimand for me has departed so all I can do is hope, hope that there is someone who is born or makes their way into power that will make the right decisions and will change the world for the better and not the worse. Yours sincerely, Buckingham ...read more.