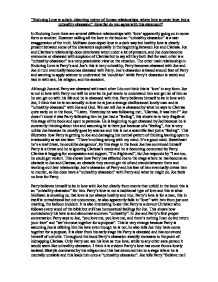 &quot;Enduring Love is a dark, distorting mirror of human relationships, where love is never love, but a unhealthy obsession&quot;. How far do you agree with this statement?

"Enduring Love is a dark, distorting mirror of human relationships, where love is never love, but a unhealthy obsession". How far do you agree with this statement? In Enduring Love there are several different relationships with 'love' apparently going on in some form or another. However calling all the love in the book an "unhealthy obsession" is a vast exaggeration of the truth. McEwan does depict love in a dark way but healthy love is clearly present between some of the characters especially in the beginning between Joe and Clarissa. Joe and Clarrisa's relationship does deteriorate when under a lot of pressure, and Joe does become overcome or obsessed with suspicion of Clarrisa but to say all they both feel for each other is a "unhealthy obsession" is a very pessimistic view on the situation. The other main relationship in Enduring Love is Parry's and Joe's this is very unhealthy, Perry becomes obsessed with Joe and Joe in turn eventually becomes obsessed with Parry. Joe's obsession is based around fear of Parry and wanting to apply science to understand his 'condition' while Perry's obsession is weird and tied in with sex, his religion, and the accident. ...read more.

In Joe and Parry's first proper conversation Parry says to Joe, "you love me, you love me, and there's nothing I can do but return your love" and "we've come together for a purpose". This is very strange because Parry is assuming Joe is offering him his love even though he is not, he also tells Joe they have come together for a purpose. It is clear from his early stage his Parry is obsessed and has convinced himself of untruths. Throughout the book Parry's obsession steadily increases to the point of kidnapping Clarissa. Only Parry can see his love as true love, while to any other sane person it would seem like unhealthy obsession. I think it is evident Parry's love has come from a lonely isolated lifestyle dominated by his religion and this has devoured him to a stage where he is mentally unstable and this leads him onto a "unhealthy obsession". Joe tells Parry "Believe me I have no feelings to control", and Parry thinks this is some kind of "joke" when Joe says it, this shows how warped Parry's mind is and how obsessed he is with thinking Joe and him share love. ...read more.

I think calling Joe and Clarissa's love an "unhealthy obsession" is a harsh overstatement, and although it's hard to judge whether their love it true what they have or had is not a "unhealthy obsession". Mrs Logan is also another example of how mad love for some one can drive them to desperate measures or thoughts. Mrs Logan is convinced that her husband has cheated on her and this is a failure of her love and trust of him on her part. This is partially a coping mechanism to his death, when Joe comes to visitor she says I imagine almost manically, "It's rosewater, can't you smell it?" like Joe did earlier in the book she has become so desperate and at her wits end that she has resorted to creating fantasy tales in her mind. McEwan throughout the book does bring out a more aggressive "darker" side of love and shows it is not all roses and happy endings, he tells the reader using the characters that love is a overwhelming powerful driving force that can bring people to their knees and make them come upon a state of almost insanity. ...read more.