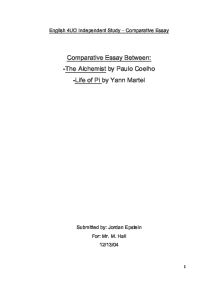 English 4UO Independent Study - Comparative Essay Comparative Essay Between: -The Alchemist by Paulo Coelho -Life of Pi by Yann Martel Submitted by: Jordan Epstein For: Mr. M. Hall 12/13/04 The protagonists in both The Alchemist, by Paulo Coelho, and Life of Pi, by Yann Martel, embark on coming of age journeys that, through a process of maturation, change their perspectives on life. Santiago and Pi, the novels respective protagonists, are introduced to the reader as immature students of life. Both adolescent males, Santiago and Pi each embark upon a physical and emotional journey that subsequently fulfills a spiritual void in their lives. Santiago and Pi are able to find true meaning in their lives in the lessons brought forth amidst their journeys and through the exploration of their spiritual faiths, the abandonment of familiar surroundings, and through their relationships with others. Through these facets of self-discovery and lessons of life learned upon their quests, Santiago and Pi are able to mature by virtue of coming of age journeys that change their perspectives on life. In the preamble of The Alchemist, Paulo Coelho introduces the reader to the character of Santiago, a young shepherd boy who longingly yearns to fill the missing void in his life. In his novel, stylistically developed as a philosophical fable, Coelho describes Santiago, the protagonist, as a "wide-eyed wonderer" (page 3) who wishes to learn all the valuable lessons that life has to offer. Santiago's desire to explore life's wonders becomes evident as he expresses interest in leaving his established adolescent life behind in order to travel the world as a shepherd. Santiago is unsatisfied with the repetition and meaningless of his everyday life. Perhaps the most prominent factor in persuading Santiago to leave his life behind is his father's inability to find fulfillment in his own life. Santiago's father had never traveled the world himself. As a result, he has lived a relatively unfulfilled life and has reluctantly permitted Santiago to follow his dreams, the very dreams that his father was never able to follow himself. ...read more.

On the course of his journey, Santiago is faced with an abundance of obstacles. Santiago is robbed of all the money in his possession, thrown in the midst of a dangerous desert tribal warfare, and even constantly ridiculed for his belief in a mirage of a Personal Legend. Yet through all these adversities, and many more, Santiago is still determined enough to continue on with his journey. This is apparent on page 72 as Santiago comments that, "The closer one gets to realizing his Personal Legend, the more that Personal Legend becomes his true reason for being." Santiago is so determined to reach his Personal Legend and to complete his journey that he is able to put everything aside in order to make achieving his Personal Legend his true reason for living. Santiago is able to mature along his journey through the exploration of his spiritual faith and analyzing lessons learned along the way. Similar to Santiago, Pi Patel is also able to achieve maturity along the path of his journey of self-discovery. As the novel progresses, Pi is unknowingly catapulted into a life altering situation that inevitably changes his perspective on life. The Patel family decides to migrate, via watercraft, to Toronto in an attempt to start their lives anew. The boat tragically sinks and Pi's parents perish in the accident, leaving Pi stranded on a lifeboat with only an assortment of animals, the ship's cargo, as companions. The piercing heartache within Pi that resulted from the loss of his parents is more vividly illustrated on page 108 as he says that, "I was not wounded in any part of my body, but I had never experienced such intense pain, such a ripping of nerves, such an ache of the heart." The sudden and abrupt tragedy that Pi was forced to endure immediately forced him to mature into a new person. After a period of mourning for the loss of his family, his only true companions, Pi comes to a realization and begins to take hold of his once fading life. ...read more.

This is a drastic progression from Pi's once anti-social and pessimistic personality. Not only has Pi found faith in the process of his journey, but he had also matured to such an extent that he is willing to help others find faith within their own lives. Throughout his journey, the concept of Pi's progressive grasp on his faith is used as a foundation upon which the novel's characters, plots, and philosophical messages can all be appropriately developed. Pi is able to achieve a new sense of maturity and subsequently change his perspective on life through the spiritual, practical, and philosophical lessons he learns along his journey. The protagonists in both The Alchemist and Life of Pi, Santiago and Pi, are able to wondrously mature and develop new perspectives on life due to the lessons that they each learn upon their journey. Santiago and Pi embark on journeys, both physically and spiritually, in order to add meaning to their once incomplete lives. Both protagonists are immediately forced to mature as they are catapulted into a world of seemingly insurmountable burdens and obstacles. Through the explorations of their spiritual faiths and the relationships they form with others along the way, Santiago and Pi are able to overcome adversity and continue their journeys that subsequently change their perspectives on life. Over the course of their respective journeys, Pi and Santiago are able to mature and discover one true facet of self-discovery that adds meaning to their lives. Santiago is able to realize that his life is complete once he finds true love and learns how to achieve spiritual sanctity from the normality of everyday life. Conversely, Pi is able to achieve self-fulfillment through an uncanny and meaningful relationship he engages in with God and the supplementary realizations he makes through exploring his spiritual faith. In completing their respective coming of age journeys, Santiago and PI are able to survive a maturation process that changes their perspectives on life and converts them into enlightened human beings. 1 ...read more.