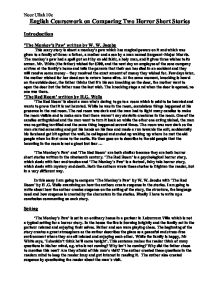 English Coursework on Comparing Two Horror Short Stories Introduction 'The Monkey's Paw' written by W. W. Jacobs This scary story is about a monkey's paw which has magical powers on it and which was given to a family of three: a father, a mother and a son by a man named Sergeant-Major Morris. The monkey's paw had a spell put on it by an old fakir, a holy man, and it gives three wishes to its owner. Mr. White (the father) wished for �200, and the next day an employee of the sons company arrives at the family's home and tells the parents that their son has died in an accident and they will receive some money - they received the exact amount of money they wished for. Few days later, the mother wished for her dead son to return home alive. At the same moment, knocking is heard on the outside door, the father thinks that it's his son knocking on the door, the mother went to open the door but the father uses the last wish. The knocking stops and when the door is opened, no one was there. 'The Red Room' written by H.G. Wells 'The Red Room' is about a man who's daring to go to a room which is said to be haunted and wants to prove that it is not haunted. While he was in the room, scandalous things happened at his presence in the red room. The red room was dark and the man had to light many candles to make the room visible and to make sure that there weren't any atavistic creatures in the room. One of the candles extinguished and the man went to turn it back on while the other one extinguished, the man was no getting terrified and the same thing happened several times. The room was now dark so the man started screaming and put his hands on his face and made a run towards the exit, accidentally his forehead ...read more.

When Morris says this, tension rises this is because 'spell' and 'fakir' are mentioned which makes the reader even more terrified as he/she might think that something bad will happen. 'He put spell on it so that three separate men could each have three wishes from it.' The quote above makes the reader very nervous as he/she might think that Mr. White is going to wish for something and would want to find out what it will be. The author used short paragraphs in the story to create suspense when something terrifying happens. E.g. when Herbert dies and when Mr. White was using his last two wishes. In the story, the author has used longer paragraphs and longer sentences to create suspense as well. This is an example of a long paragraph and a long sentence used in the story to create suspense, 'I expect you'll find the cash tied up in a big bag in the middle of your bed,' said Herbert, as he bade them good night, 'and something horrible squatting up on top of your wardrobe watching you as you pocket your ill-gotten gains.' The ending of 'The Monkey's Paw' is kind of like a cliff-hanger as it leaves the reader imagining. This technique is used in many soaps to keep the audience watching so that they can find out the rest of the story. It leaves the readers imagination to run wild. This is typical of a horror story because an imagination is more better than a director could make a movie so the readers can make the ending up themselves. The narrator of 'The Red Room' is an arrogant person and unafraid of ghosts. He believes that if you can't see the ghosts then they are not real. As the narrator of 'The Red Room' is arrogant, from the beginning of the story he is disliked by the reader. ...read more.

Both authors have used a technique of removing other characters in the story to leave one or two characters. This is effective because it tells the reader that the ending is near and something bad is going to happen soon. This technique is used when the man was going to 'The Red Room' alone and when Mr and Mrs White were trying to wish their son back alive. In 'The Red Room' there is a lot of fear and mystery because the reader is unclear of what made all the candles go out in the room. In 'The Monkey's Paw' the reader is left out unclear on why Mr White wished his son dead in the ending of the story. Both authors tried putting questions in the readers mind to make it interesting and which did work. The author of 'The Red Room' has used very complicated words throughout the story whereas the author of 'The Monkey's Paw' has used straightforward English to make the story easy to read and understand. I think H.G Wells created a brilliant story to create suspense in structure, setting, language and characters. H.G Wells has used better vocabulary in his story to create suspense than W.W Jacobs to create a growing sense of tension. The setting of 'The Red Room' creates a lot of tension as it is set in an old castle which is a very spooky place for a horror story. The characters in' The Red Room' creates tension as well because the way the author has described their appearance in the story. I liked the way H.G Wells has described the man's journey to the room and the room it self which has created a lot of tension and which made us picture it in our minds. After reading both stories, I prefer 'The Red Room' is a better horror suspense story because I think it is more horrific. I was able to understand the story more while reading it better than 'The Monkey's Paw' and enjoyed it very much. Noor Ullah 10c Noor Ullah 10c ...read more.