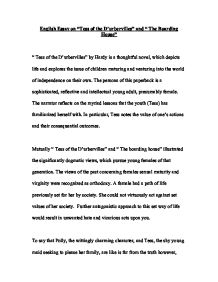 English Essay on "Tess of the D'urbervilles" and " The Boarding House" " Tess of the D'urbervilles" by Hardy is a thoughtful novel, which depicts life and explores the issue of children maturing and venturing into the world of independence on their own. The persona of this paperback is a sophisticated, reflective and intellectual young adult, presumably female. The narrator reflects on the myriad lessons that the youth (Tess) has familiarized herself with. In particular, Tess notes the value of one's actions and their consequential outcomes. Mutually " Tess of the D'urbervilles" and " The boarding house" illustrated the significantly dogmatic views, which pursue young females of that generation. The views of the past concerning females sexual maturity and virginity were recognized as orthodoxy. A female had a path of life previously set for her by society. She could not virtuously act against set values of her society. Further antagonistic approach to this set way of life would result in unwanted hate and vicarious acts upon you. To say that Polly, the wittingly charming character, and Tess, the shy young maid seeking to please her family, are like is far from the truth however, concerning the characters physical attributes; a correlation is seeable. Tess is sensual and na�ve in her own rights. ...read more.

Sexually inexperienced, and mentally weak, Alec took advantage of her. From that point on, Tess's life had taken a turn for the worse. Starting with the calamity with Alec, she was left with an unhealthy baby and a world away from where she was presuming to be. Hardy continues to leave many of the details of Tess's seduction ambiguous by allowing a certain space of time to pass between the night at The Chase and Tess' return to Marlott several weeks later. Both Tess and Alec, however, indicate that their sexual encounter was to some degree consensual. Most importantly, Tess admits that her "eyes were a little dazed" by Alec and that the event was a moment of weakness. This is the first concrete for Alec's seduction of her, rather than accusing him of treachery. Indication that Tess realizes her capability for sexuality; previously unaware of others' sexual designs for her and disdainful of the lust exhibited by others, Tess now admits that she too was capable of some degree of lust for Alec. This is significant as a development of Tess's sexual attitudes and as an indication of her inherent self-criticism. She finds herself to blame instead of accusing him of treachery. The sentiment of guilt was felt in both situations. Polly did not realize the significance of her puerile act until rumors were flourishing and " The madam" had been overexposed to them. ...read more.

Polly is described as " a slim girl of nineteen". You notice that points of view are used in both stories. Frequently, Hardy writes as though he is retelling a tale which has been handed down from people who observed some of the events or were themselves told about them. Both writers very elegantly make use of different viewpoints to help give the story credibility. The orchestration of how both authors used pathetic fallacy was well done and pragmatically emit strong, emphatically images. This technique can be used to acquire the reader's attention and truly make the scene realistic. It may also be used to foresee reality e.g. it is not always cloudy or rainy when bad things occur. As I speak of orchestration, I am also implementing that the author is the omniscient. It is in his hands the true fait of the characters and to cause drama in order for the readers to potentially increase and for the book to be more appealing. Drama plays a lead role in both tales and when evaluated, Tess's life appears to be the aftermath of drama. As to does Polly's life. Thus the reader is not fully detailed as to where her mistake will take her (although it is highly palpable). Personally, I would not have ever pondered on the thought of both tales taking a bathetic turn. This is a technique used by a vast number of authors not only in the past. ...read more.