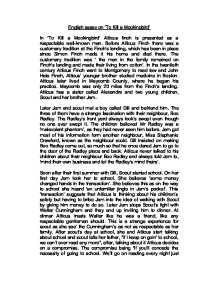 English essay on 'To Kill a Mockingbird'.

English essay on 'To Kill a Mockingbird' In 'To Kill a Mockingbird' Atticus finch is presented as a respectable well-known man. Before Atticus Finch there was a customary tradition at the Finch's landing, which has been in place since Simon Finch made it his home and died there. The customary tradition was ' the men in the family remained on Finch's landing and made their living from cotton'. In the twentieth century Atticus Finch went to Montgomery to read law and John Hale Finch, Atticus' younger brother studied medicine in Boston. Atticus later lived in Maycomb County, where he began his practice. Maycomb was only 20 miles from the Finch's landing. Atticus has a sister called Alexandra and two young children, Scout and her brother Jem. Later Jem and scout met a boy called Dill and befriend him. The three of them have a strange fascination with their neighbour, Boo Radley. The Radley's front yard always look's swept even though no one ever swept it. The children believed Mr Radley was a 'malevolent phantom', as they had never seen him before. Jem got most of his information form another neighbour, Miss Stephanie Crawford, known as the neighbour scold. ...read more.

Jem and Scout now wondered why their father never hunted, but the answer was that he had been given an unfair advantage over other living things. Knowing their father can shot the children where proud of Atticus, especially Jem. Soon after, yet another neighbour, Mrs Dubose, was agitating Jem. Although she was horrible Atticus would say, "she's an old lady and she's ill. Just hold your head up high and be a gentleman". And "it's your job not to let her make you mad". Jem unfortunately let Mrs Dubose get to him and for his actions he was punished, his punishment being to read to her after school and on Saturdays for 2 hours for a month. During the reading time Mrs Dubose would call Atticus "a Nigger-lover", Atticus explained to scout that name-calling is done by "ignorant, trashy people and they use 'nigger-lover' when they believe a person is favouring Negroes over and above themselves". After Mrs Dubose died Atticus told Jem, "even if you had not fallen in to her hands I would have had you read to her anyway. I wanted you to see what real courage is a man with a gun in his hands". ...read more.

Him and Atticus start off a kind of argument, Heck trying his best to get Atticus to see the truth. Scout shows that she has learnt a lot over the years. She is beginning to understand the principles that Atticus has tried to teach her. When asked if she could understand that Mr Ewell fell on his knife, she replied, "yes sir I understand, Mr Tate was right". Then when asked what she meant she explained, "It'd sort of be like shootin' a mocking-bird". I think that when Atticus heard those words coming from his daughter that it made him realise that all the things he had told them actually got through. In my view Atticus is a well-respected and very honourable man who has very strong principles. He is a great father, he does not tell his children what to do he just advises them to do the right thing. The best quality he has is truthfulness to his children. This is shown when his brother tells Scout a lie about what the meaning of the word and what they want to hear. Atticus as a citizen is well mannered, composed and respected. He is a valued member of the community and a well-loved neighbour. All in all Mr Atticus Finch is a brilliant man and great family figure. ...read more.