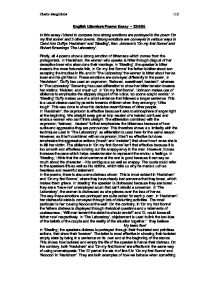 English Literature Poems Essay - 22/4/05 In this essay I intend to compare how strong emotions are portrayed in the poem 'On my first sonne' and 3 other poems. Strong emotions are conveyed in various ways in Carol Ann Duffys 'Havisham' and 'Stealing', Ben Johnson's 'On my first Sonne' and Robert Brownings 'The Laboratory'. Firstly, all 4 poems show a strong emotion of bitterness which comes from the protagonists. In 'Havisham, the woman who speaks is hitter through disgust of her deceptive lover who abandons their marriage. In 'Stealing', the speaker is bitter towards the more fortunate folk, In 'On my first Sonne' the father is bitter about son escaping the troubles in life, and in 'The Laboratory' the woman is bitter about her ex lover and his girl friend. These emotions are conveyed differently in the poem, In 'Havisham', 'Duffy has used an oxymoron; 'Beloved, sweetheart, bastard!', whereas in 'The Laboratory' 'Browning has used alliteration to show her bitter tension towards her vistims; 'Moisten, and mash up'. In 'On my first Sonne', 'Johnson makes use of sibilance to emphasize the slippery disgust of his voice; 'so soone scap'd worlds'. In 'Stealing' Duffy makes use of a short sentence that followed a longer sentence. ...read more.

The most particular is her 'cawing Noooo at the wall'. On the contrary, in 'On my first Sonne' the fathers distress is displayed through rhetorical questions and statements of uselessness.; 'Will man lament the state he should envie?' and 'O, could loose all father now' respectively. In 'The Laboratory', objabement is used to link the two idea of the beliefs of the couple and the reality of the situation together; 'they believe My tears flow'. In 'Stealing; the speakers distress is portrayed through their frustrated and pointless actions, that show their 'bordom'. The latter is most effective in showing their isolated empty state by being in a sentence on its own and at the beginning of the stanza. This shows how isolated and empty the life of the speaker is hence their distress. On the contrary, both 'Havisham' and 'On my first Sonne' are affective in the same way of using onomatopoeia; The 'O' part at the start of line 5 in 'On my first Sonne' and 'Nooooo' in 'Havisham'. They are both examples of how we behave when something really bad has happened to use, and therefore gets that distressed impression across. I think that 'Havisham' is more effective in this area because it says she is 'cawing' the sound. ...read more.

Again. Again.' This was used to show how jealous the speaker is of the more fortunate folk who made the snowman. It shows that they aren't backing off from showing their hate towards life. The 'snowman' could also be considered a symbol of a happy family relationship that the speaker has 'booted' to destroy because he/she is jealous of them. In 'The Laboratory', Browning makes use of metaphors like 'Let death be felt' and alliteration 'Brand, burn up 'bite' to emphasize very vigorous hate towards the intended victim. This conveys how much she wants her victim to be ruined. I think that this is the most effective at conveying her hate because these ideas are also tightly linked with a rhyming couplet; '....pain' '....remain'. these show how endured she wants the suffering to be, hence how spiteful the woman is. 'Stealing' also uses the poem format to portray the Protagonists State of emotion. Duffy uses free verse to show how topsy-turvy and confused the speaker is, but in my opinion it has no effect on the reader but makes the poem harder to read since the pace has no constancy. By Charlie Macgilchrist Of St. Benedicts School Derby Charlie Macgilchrist 11C ...read more.