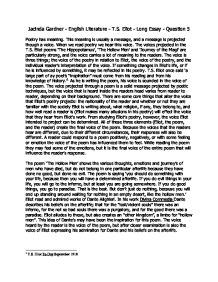 Jacinda Gardner - English Literature - T.S. Eliot - Long Essay - Question 5 Poetry has meaning. This meaning is usually a message, and a message is projected though a voice. When we read poetry we hear this voice. The voices projected in the T.S. Eliot poems 'The Hippopotamus', 'The Hollow Men' and 'Journey of the Magi' are particularly strong, and the voice carries a lot of meaning to the readers. The voice is three things; the voice of the poetry in relation to Eliot, the voice of the poetry, and the individual reader's interpretation of the voice. If something changes in Eliot's life, or if he is influenced by something, it may be reflected in his poetry. T.S. Eliot once said 'a large part of ay poet's "inspiration" must come from his reading and from his knowledge of history.'1 As he is writing the poem, his voice is sounded in the voice of the poem. The voice projected through a poem is a solid message projected by poetic techniques, but the voice that is heard inside the readers head varies from reader to reader, depending on their background. ...read more.

Eliot repeats "broken glass" "broken column" "broken stone" "broken jaw". This use of repetition says to the reader that these men are broken, hollow men. He also repeats "this is the way the world ends", emphasise that the world indeed does end, and the way it ends is inevitable. ("a whimper") Another important part of the voice of the poem is the title 'The Hollow Men'. It firstly draws attention to the subject matter, this poem relates to fellow men. The title immediately generates sympathy for the personas, as nobody should be or feel hollow. It was derived by Eliot from two texts: The Hollow Land and The Broken Men. This also stresses the emptiness these men feel, as does the fragmentation of a 'hollow man's' speech in V. Eliot again alludes at the end of the poem in "Not with a bang but a whimper". The "bang" is what Guy Fawkes hoped for, but a whimper is what he got, because he was arrested before he could blow anything up with his gunpowder. These techniques transmit to the readers the voice of the poem so that it may influence their reading of the poem, and their response to it. ...read more.

For different people, the voice of this poem may have been received differently, but every reader of this poem would have a response to it, because there is a very distinctive voice that projects itself from the poem for all readers to hear. I chose to study these poems in depth because once I found the meaning of them, and heard the voice that Eliot was trying to project through the poems, I responded to them positively and with a lot of emotion. I also related to these poems as the voice of the poem was saying things to me that I have thought about before. I also responded well and with awe to these poems because the subject matter of them is still relevant now. We still don't know what happens in the afterlife and so are wary of what we do in this life, and the people who we consider great people (eg. Political leaders) are still flawed. There is most definitely a distinct voice in all poetry, especially in T.S. Eliot's, and voices of these poems influence the readers response to a large extent. If voices were not heard through poetry, poetry would not have had the effect on society and history that it has had. ...read more.