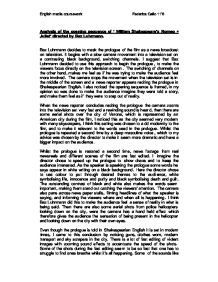 Analysis of the opening sequence of ' William Shakespeare's Romeo + Juliet' directed by Baz Luhrmann. Baz Luhrmann decides to mask the prologue of the film as a news broadcast on television. It begins with a slow camera movement into a television set on a contrasting black background, switching channels. I suggest that Baz Luhrmann decided to use this approach to begin the prologue, to make the viewers focus directly on the television screen. The switching of channels on the other hand, makes me feel as if he was trying to make the audience feel more involved. The camera stops the movement when the television set is in the middle of the screen and a news reporter appears reciting the prologue in Shakespearian English. I also noticed the opening sequence is framed, in my opinion so was done to make the audience imagine they were told a story, and make them feel as if they were to step out of reality. When the news reporter concludes reciting the prologue the camera zooms into the television set very fast and a rewinding sound is heard, then there are some aerial shots over the city of Verona, which is represented by an ...read more.

There is a lot of fast editing of violent images with zooming sound effects to accentuate the speed of the shots. Some of the shots during the fast editing seem to be so fast that one has to struggle to find ones breathe whilst it's all happening. Some of the sounds like gun shots and police sirens are heard before the images are seen. In my opinion the director chose to do this to make the audience curious of what's going to happen next, in a way persuading them to want to see more and therefore creating tension. 'Religious' music is constantly getting louder throughout the prologue. In my opinion this effect of music slowly building up was chosen by the director to create a building up of tension. I imagine Baz Luhrmann decides to build up tension in the prologue to symbolise that there might be a building up of tension during the film. There is also a continuous contrast between religion and violence during nearly all of the fast editing of the prologue. I reckon the director decided to make these two opposite themes very dominant during the prologue to suggest to the audience that these could be two important themes of the story. ...read more.

I also imagine this could symbolise a secret love between the two that no one else is aware of. As the mothers are introduced they look worried, scared and sad whilst on the other hand the fathers are being portrayed to the audience as stereotypical 'mafia bosses' in dark cars, smartly dressed and looking angry with serious expressions, which could also be interpreted as a clich�. The relation with the fathers being 'mafia-like' could also suggest that the families act like gangster gangs against each other during the film and the fact that it starts from the fathers could show its being going on from generations. Finally, the introductory tone of the start of the film is broken by a black screen with simple text 'William Shakespeare's Romeo + Juliet' emblazoned in red and white. Again, this is an example of the use of colour as a medium for drawing attention to the themes of the play. This final image of the title of the film ending the prologue makes me feel as if the director was trying to make sure it hit the audience making an impact on them. English media coursework Federica Gallo 11'6 ...read more.