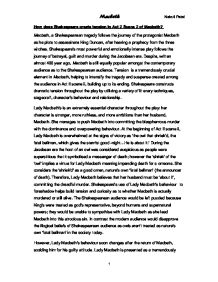 How does Shakespeare create tension in Act 2 Scene 2 of Macbeth?

How does Shakespeare create tension in Act 2 Scene 2 of Macbeth? Macbeth, a Shakespearean tragedy follows the journey of the protagonist Macbeth as he plots to assassinate King Duncan, after hearing a prophecy from the three witches. Shakespeare's most powerful and emotionally intense play follows the journey of betrayal, guilt and murder during the Jacobean era. Despite, written almost 400 year ago, Macbeth is still equally popular amongst the contemporary audience as to the Shakespearean audience. Tension is a tremendously crucial element in Macbeth, helping to intensify the tragedy and suspense created among the audience in Act II scene ii, building up to its ending. Shakespeare constructs dramatic tension throughout the play by utilizing a variety of literary techniques, stagecraft, character's behaviour and relationship. Lady Macbeth's is an extremely essential character throughout the play: her character is stronger, more ruthless, and more ambitions than her husband, Macbeth. She manages to push Macbeth into committing the blasphemous murder with the dominance and overpowering behaviour. At the beginning of Act II scene ii, Lady Macbeth is overwhelmed at the signs of victory as 'the owl that shriek'd, the fatal bellman, which gives the stern'st good-night...He is about it.' During the Jacobean era the hoot of an owl was considered auspicious as people were superstitious that it symbolised a messenger of death; however the 'shriek' of the 'owl' implies a virtue for Lady Macbeth meaning impending death for someone. ...read more.

Macbeth is a crucial character used by Shakespeare to create dramatic tension, through the terrible effects that ambition and guilt can have on a man who lacks strength of character. Unlike Lady Macbeth, Macbeth is plagued by worry and almost aborts the crime in Act II scene ii. Towards the ending of the scene, Shakespeare uses blood imagery and irony to emphasise Macbeth's guilt: 'Will all great Neptune's ocean wash this blood clean from my hand? ...The multitudinous seas incarnadine/ Making the green one red.' Macbeth's guilt is overbearing and the 'multitudinous' of his crime against the Divine Rights of King, awakens him into a powerful sense of guilt, leaving a tormenting effect on his mind. Moreover, ironically 'all great Neptune's ocean' cannot cleanse of the burden of guilt, that there is enough blood on his hands to stain the entire ocean 'red'. Additionally, the use of the phrase 'multitudinous' further emphasising the enormity of his crime, which no amount of water from the 'Neptune's ocean' could clean his guilty conscience, helping to build tension. Furthermore, the vibrant images of 'blood' and 'water' symbolises Macbeth's inability to erase the memory of Duncan's murder and the impossibility of ridding their conscience of the deceitful deed they committed. The Shakespearean audience would be unable to sympathise with Macbeth's guilt as the Jacobean people strongly believed in the Divine Right of King, whereby insulting the King would be an insult to god. ...read more.

Shakespeare's stagecraft is also extremely vital in Macbeth, helping to create an ominous and tense atmosphere in Act II scene ii through sounds, make-up and the use of props. Sounds are tremendously important in Macbeth, helping to construct tension: ''I heard the owl scream and the cricket's cry.'' Shakespeare heightens the feeling of the eeriness of night by introducing the remarkable sound of the owl's voice, and most effectively when some deed of villainy is on foot, as 'owl screams' popularly signs to portend coming disaster. Similarly, the 'cry' of the 'cricket' adds to the mood and tragedy of the murder. Moreover, 'blood' is also mentioned numerous times throughout the play, providing an omnipresent tone which helps build tension. Shakespeare's use of the word 'blood' is particularly significant, helping to unfold dramatic events of the play. Furthermore daggers are also essential in Macbeth, making the audience reminisce about the gruesome murder, helping to interest and tense the audience throughout the play. Macbeth, Shakespeare's shortest tragedy but one of the most influential and emotionally intense in history follows the journey of the betrayal, guilt, murder leading to its gruesome aftermath. Shakespeare has created an amazing work of literature, providing the allusion of our current times through the use of stagecraft, literary devices and character behaviour. Macbeth not only entertains us but with Shakespeare's forward-thinking for his time, provides voice to the marginalised in society. ?? ?? ?? ?? Macbeth Nairuti Patel 1 ...read more.