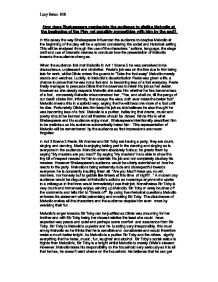 How does Shakespeare manipulate the audience to dislike Malvolio at the beginning of the Play yet possibly sympathise with him by the end?

How does Shakespeare manipulate the audience to dislike Malvolio at the beginning of the Play yet possibly sympathise with him by the end? In this essay the way Shakespeare influenced the audience to despise Malvolio at the beginning of the play will be explored considering the social and historical setting. This will be analysed through the use of the characters' actions, language, the stage craft and use of dramatic devices to conclude how the presentation of Malvolio towards the audience changes. When the audience first met Malvolio in Act 1 Scene 5 he was perceived to be discourteous, unpleasant and vindictive. Feste's job was on the line due to him being late for work, whilst Olivia orders the guards to "Take the fool away" Malvolio merely stands and watches. Luckily, to Malvolio's dissatisfaction Feste was given a life, a chance to prove that he was not a fool and is becoming less of a fool everyday. Feste finally manages to persuade Olivia that he deserves to retain his job as her Jester, however as she deeply respects Malvolio she asks him whether he has become less of a fool, conversely Malvolio misunderstood her, "Yes, and shall do, till the pangs of our death shake him, infirmity, that decays the wise, doth ever make the better fool". Malvolio means this in a spiteful way, saying that he will become more of a fool until he dies. Fortunately Olivia lets him keep his job as she believes he also thought he was becoming less of a fool. ...read more.

Malvolio was being very threatening and misusing his authority, as the audience like Maria because she is witty and fun it makes the audience hate him more and we don't want Maria to lose her job. Fabian doesn't have a huge part in the play, Shakespeare mainly uses him to build up the negative things against Malvolio, "You know he brought me out o'favour with my lady about a bear baiting here" Fabian is complaining about Malvolio getting him into trouble. Shakespeare's audience would sympathise with Fabian as many of them may have been in the same situation, however nowadays the majority of the audience would be disgusted at the thought of people inflicting pain upon animals for entertainment. As the play continues everyone gradually dislikes Malvolio even more. Sir Toby, Fabian and Maria have had enough of Malvolio always ruining their fun; therefore they decided to play a trick on Malvolio for revenge. Maria laid a forged letter "from Olivia" confessing her love for him, but it must be kept a secret. The letter is used as a dramatic device, we know what is going on but Malvolio and Olivia don't. The aim of the letter is to trick him into making a fool of himself. Malvolio is in his own world and soon starts to dream about what life would be like when he fulfils his ambition of becoming "Count Malvolio". The audience and characters find this extremely amusing as it is very unrealistic as he is only her steward. ...read more.

He demands justification. Olivia is deeply confused although she did recognise Maria's handwriting on the letter and she too demands an explanation. Finally Fabian reveals the vicious joke against Malvolio and Olivia seems genuinely sorry for Malvolio "poor fool, how have they baffled thee." However Feste just goads him. The humiliation is too much, he has lost all of his authority and staying there would make the suffering ongoing especially with the gaiety of the others. So entirely isolated from everyone Malvolio leaves, but not before cursing everyone in the room "I'll be revenged on the whole pack of you!" he wanted to keep one last ounce of pride even though now Olivia is totally unattainable. To conclude, our first impression of Malvolio was that he is ill-mannered, distasteful and malicious. As the play went on we began to hate him even more due to Shakespeare's dislike of puritans and because he always wrecked the fun. Considering what Malvolio did to the other likable characters in the play the audience really enjoyed watching the plot unfold. However, as the play progressed it became sadistic and spiteful, the humour was lost and the audience's empathy moved towards Malvolio. By the end of the play everyone except for Feste felt some sort of sympathy towards Malvolio. The Shakespearian audience, like Feste and the other characters may still have felt a little pleasure in watching Malvolio being tormented, but a modern day audience however would be quite compassionate and feel that the joke just went too far. ?? ?? ?? ?? Lucy Eaton 10R ...read more.