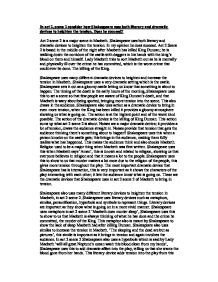 In act 2, scene 2 consider how Shakespeare uses both literary and dramatic devices to heighten the tension. Does he succeed?

Shakespeare uses this when a person knocks on the castle gate; this brings in the audience, making them fully realize what has happened. This makes the audience think and also shocks Macbeth. Religion used to be a major thing when Macbeth was first written. Shakespeare uses this when Macbeth says 'Amen', this is known and related to religion, showing us that everyone believes in religion and that it means a lot to the people. Shakespeare uses this to show to us that murder matters a lot more due to the religion of the people, this gives more tension throughout the play. The most important dramatic device that Shakespeare has is interaction, this is very important as it shows the characters of the play interacting with each other; it lets the audience know what is going on. These are the dramatic devices that Shakespeare uses in act 2 scene 2 of Macbeth to bring in tension. ...read more.