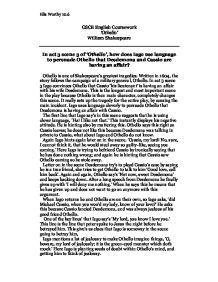 In act 3 scene 3 of Othello, how does Iago use language to persuade Othello that Desdemona and Cassio are having an affair?

GSCE English Coursework 'Othello' William Shakespeare In act 3 scene 3 of 'Othello', how does Iago use language to persuade Othello that Desdemona and Cassio are having an affair? Othello is one of Shakespeare's greatest tragedies. Written in 1604, the story follows the campaign of a military general, Othello. In act 3 scene 3 Iago convinces Othello that Cassio 'his lieutenant' is having an affair with his wife Desdemona. This is the longest and most important scene in the play because Othello is then main character, completely changes this scene. It really sets up the tragedy for the entire play, by causing the main incident. Iago uses language cleverly to persuade Othello that Desdemona is having an affair with Cassio. The first line that Iago say's in this scene suggests that he is using clever language, 'Ha! I like not that.' This instantly displays his negative attitude. He is hinting also by muttering this. Othello says this right as Cassio leaves; he does not like this because Desdemona was talking in private to Cassio, what about Iago and Othello do not know. Again Iago hints again later on in the scene. 'Cassio, my lord! No, sure, I cannot think it, that he would steel away so guilty-like, seeing you coming.' Here Iago is trying to befriend Cassio by ironically saying that he has done nothing wrong; and again he is hinting that Cassio saw Othello coming so he stole away. ...read more.

Again Iago tells Othello that he is upset. 'My lord, I see you are moved.' This is the fourth time he say's this. Every time he says this Othello begins to believe him. Iago leaves to give Othello some time to think Othello starts to believe some of the things that Iago is saying. 'why did I marry? This honest creature doubtless see and knows more, much more, than he unfolds.' This is saying that Othello is questioning his marriage to Desdemona and knows that Iago knows much more than he is telling him. Othello latter on performs a soliloquy; in this soliloquy he starts to doubt Desdemona; he also is starting to change his language and is starting to use language similar to Iago's, 'And not their appetites! I had a rather be a toad,' Here he is saying he would rather be a toad than have to go through with all this hate and breaking of marriage, it also says that a piece of Desdemona's heart belongs to someone else. When Emilia gave Iago the handkerchief to Iago tells her to leave and he also performs a soliloquy. 'Trifles light as air are to the jealous confirmations strong as proofs of holy writ: this may do something.' Iago is basically saying that if you're jealous and you are looking for something, when you do find something one little thing can mean everything. ...read more.

This is showing that Iago is using his language to make Othello to believe him yet again. Othello finally believes Iago, 'I, that the slave had forty thousand lives!' This is saying he needs to kill Cassio thousands of times before what he has been doing can be forgiven. Love has no chance now hate has finally won, 'yield up, O love, thy crown and hearted throne to tyrannous hate! Swell, bosom, with thy fraught, for 'tis aspic tongues!' Here Othello has caught onto one of Iago's traits of his language, the animal imagery. He has totally changed his language now 'never Iago: like to the Pontic sea' this is a very cold and dark sea and he is never going to change his mind. At the end of the scene Iago promise's 'what bloody business ever,' he will help him through everything. Very dramatically the tension is cut by Othello saying 'within these three days let me here thee say that Cassio is not alive.' Which is Othello saying to Iago, that he wants Iago to kill Cassio in the next tree days. The end line in the scene is very powerful and of course comes from Iago, 'I am your own for ever' this shows Iago's wicked sense of humour towards the audience by mocking marriage. Iago's skill of language to persuade Othello is extremely powerful. But Iago is not entirely responsible Othello is partly to blame. Othello should have really known better than to believe Iago. ?? ?? ?? ?? Ella Worthy 10.6 ...read more.