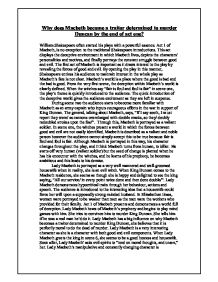 Why does Macbeth become a traitor determined to murder Duncan by the end of act one? William Shakespeare often started his plays with a powerful essence. Act 1 of Macbeth, is no exception to the traditional Shakespeare introductions. This act displays the deceptive environment in which Macbeth lives, depicts the characters' personalities and motives, and finally portrays the constant struggle between good and evil. The first act of Macbeth is important as it draws interest to the play by revealing the forces of good and evil. By opening the play in this manner, Shakespeare entices his audience to maintain interest in the whole play as Macbeth's fate is not clear. Macbeth's world is a place where the good is bad and the bad is good. From the very first scene, the deception within Macbeth's world is clearly defined. When the witches say "fair is foul and foul is fair" in scene one, the play's theme is quickly introduced to the audience. The quick introduction of the deceptive world gives the audience excitement as they are left in suspense. During scene two the audience starts to become more familiar with Macbeth as an army captain who inputs courageous efforts in the war in support of King Duncan. ...read more.

When Lady Macbeth greets the king in scene 6, she seems to be a good hostess and housewife. Soon after, Lady Macbeth' asks evil spirits to "tend on moral thoughts, and unsex," her. Lady Macbeth's manipulative and constantly changing character is highlighted in act one, because she appears to be the central figure in determining the fate of King Duncan Macbeth, the major character of this play is clearly described as a man with conflicting sides to his personality. Macbeth seems to be a loyal and gallant hero as he is described by the king as the "worthiest cousin". However, Macbeth's loyalty is obviously not true when he, talking to himself, says, "Prince of Cumberland! That is a step/ on which I must fall down or else o'erleap, /...Let not light see my black and deep desires." Macbeth's deceiving thoughts make his character interesting and appealing as his ambition to become king is, no doubt, similar to the ambitions of most people to become powerful, rich and respected. Duncan, the king throughout act 1, is one of the only characters who doesn't change. He is not deceiving but he compromises Macbeth's fate and future, adding major complications. When Duncan appoints his son as "The Prince of Cumberland" he creates difficulty for Macbeth in his ambition to become king. ...read more.

The classic war between good and evil usually has the forces of good win, but as "fair is foul and foul is fair"; the outcome of the war is now questioned. Personal ambition is important and leads to both good and evil results. Banquo's ambition is to simply please King Duncan through loyalty, without the need for great reward. As reward for good service, the king promises Banquo to, "enfold thee/and hold thee to my heart". In response Banquo answers, "There if I grow/ the harvest is your own". On the other hand, Macbeth's ambition is to become king through deceiving and murdering Duncan. In conclusion, act one of Macbeth is important for a number of reasons. First, the playwright displays the deceptive environment, in which Macbeth lives. Secondly, the characters' personalities, motives and ambitions are depicted, and finally, the constant struggle between good and evil is defined. I think Macbeth's change from soldier to traitor is his own doing. He allowed the evil that is within everyone around him influence and overwhelms him. His ambition and need for power also influenced him turning into a traitor determined to murder Duncan. Also the witches prophecy and predictions tap into Macbeths own desire and ambition. Lady Macbeth manipulates, argues and thinks out Macbeth and persuades him. Over all, Macbeth was a man of action not politics, and ambition and greed overwhelmed him, which led to the tragedy of Macbeth. Elinor Thomas ...read more.