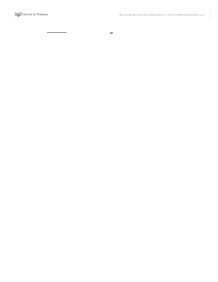 How does Shakespeare present difficulties in relationships in "Much Ado About Nothing"? Shakespeare's play "Much Ado About Nothing" conveys the typical attributes of an English comedy although it is set in Messina, Italy. He manages to present the many difficult aspects of love and romance, as well as portraying the patriarchal society, whilst still keeping the light heartedness that comedy's of that era showed. The play is based around Count Claudio, Hero, Beatrice and Benedick and the problems they face as they embark on their journey of love and self discovery. The Masked Ball and Wedding scene are key points in "Much Ado About Nothing" as they show the couples at their best and worse. Beatrice manages to convey her feelings towards men quite early on in the Masked Ball scene; "I could not endure a husband with a beard on his face! I had rather lie in the woollen." This shows how Beatrice would rather suffer discomfort than be married. ...read more.

During the wedding scene we see how Beatrice's temper can get the better of her and how the patriarchal society can get in the way of what she sees as justice. "O God that I were a man! I would eat his heart in the market-place." Beatrice wishes that she were a man so that she could do her cousin Hero justice. She is so furious with Claudio for embarrassing Hero that she wishes she could consume his heart in the way he did Hero's. She then takes it one step further when she tells Benedick to "Kill Claudio!" if he loves her. Whereas on the other hand Hero is sweeter and would never speak out of turn or demand anything from anyone, no matter whom they were. Even when she is being accused of all sorts during her own wedding, she hardly says more that two words. She also manages to stay relatively calm and polite towards the Count... ...read more.

Leonato expresses the importance of reputation when his daughter is wrongly accused of having sex. First of all he believes Claudio, Don Pedro and Don John when they accuse "gentle Hero" and doesn't ask her side at all. He is too worried about what other people may think about him and his family to even second thought that they may be lying or a deception may have taken place. In conclusion Shakespeare uses metaphors and dramatic language throughout the play such as "approved wanton" and "...see you one day fitted with a husband". Shakespeare does this to show unusual the points of view of Beatrice and Benedick are as well as get the dramatic mishaps for that era. For example Beatrice uses language not expected of a lady and does not want to get married. Dramatic language is also used to show where women stood in society, especially in the wedding scene where Hero receives large amounts of verbal abuse but does not retaliate. This dramatic language often becomes humorous which is displayed through the denial of love between Beatrice and Benedick. ...read more.

The question here asks candidates how effectively William Shakespeare incorporates the struggles of a relationship in 'Much Ado About Nothing'. The candidate has correctly identified the characters required for analysis to answer the question (the couples Benedick and Beatrice, Claudio ...

The question here asks candidates how effectively William Shakespeare incorporates the struggles of a relationship in 'Much Ado About Nothing'. The candidate has correctly identified the characters required for analysis to answer the question (the couples Benedick and Beatrice, Claudio and Hero), with some fair focus on the question, though the extent to which they focus specifically on the struggles that couples face in a relationship is dubious. Not that what is written is wrong - it just doesn't pertain to the question very clearly. All answers from all candidates must clearly relate to the question, with possible quoting of the question (not whole phrases, just small ones e.g. "this is another difficulty couples in a relationship will face") where possible.

The Level of Analysis is questionable. Where to candidate gets most of their marks is their appreciation of the context of the time when the play was set. In Messina, Italy, when indeed a "patriarchal society" was widely recognised as the norm, but the link the candidate makes to any of the character's relationships is quite buried. Eventually, they succeed when discussing Claudio and Hero and how Hero subordinates to Claudio's accusations politely, instead of shouting back like Beatrice might have done.

It would have been better to have gone through Point by Point, rather than discuss the characters in turn. This is because there are many relationship struggles present in 'Much Ado About Nothing' and the best way to answer this is to address one point e.g. - trust, and then talk about how difficulties with trust feature in Benedick and Beatrice's and Claudio and Hero's relationships, and then move on to the next point e.g. - lies/deceit, etc.

The conclusion also is very woolly, and does not address the question at all. There are moments when the question is directly addressed after making a point and providing evidence (though perhaps more quotes with appropriate links to the texts could be used) and these are when the candidate scored the most points. There is a section though that bears almost no relevance to the question whatsoever (the section where they talks about clothing being a recurrent metaphor) and so gains no points here. Again, I cannot stress how important it is to make sure all points are linked to the question.

The Quality of Written Communication here is "fine". The setting out of the paragraphs requires adjustment and the way quotes often appear as singular, one-line paragraphs must be a typing issue because if not, the candidate must learn that to write an analytical essay means to write in standard English, adhering to all standard writing conventions such as avoiding colloquial language and structuring paragraphs correctly. There is limited accurate use of punctuation (ellipses and parentheses are dubiously used and quite frankly unnecessary), but overall the answer is fairly-well written and they get their point across, even if a decent half does not directly answer the question.