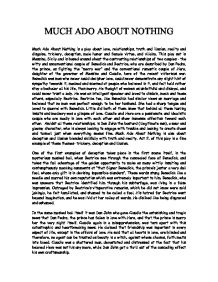 Much Ado about Nothing Act 2 analysis

MUCH ADO ABOUT NOTHING Much Ado About Nothing is a play about love, relationships, truth and illusion, reality and disguise, trickery, deception, male honor and female virtue, and villainy. This play set in Messina, Sicily and is based around about the contrasting relationships of two couples - the witty and unconventional couple of Benedick and Beatrice, who are described by Don Pedro, the prince, as fighting the "merry war" and the conventional romantic couple of Hero, daughter of the governor of Messina and Claudio, hero of the recent victorious war. Benedick was man who never could decipher love, could never demonstrate any slight hint of sympathy towards it, mocked and scorned at people who believed in it, and felt he'd rather stay a bachelor all his life, than marry. He thought of women as unfaithful and disloyal, and could never trust a lady. He was an intelligent speaker and loved to disdain, mock and tease others, especially Beatrice. Beatrice too, like Benedick had similar views on marriage and believed that no man was perfect enough to be her husband. ...read more.

He disliked like being disgraced and ashamed. In the same masked ball itself it was Don John who gave Claudio the astonishing and tragic news that Don Pedro, the prince has fallen in love with Hero, and that the prince is marry her the very night itself. Claudio again in a misapprehension, was torn apart with this catastrophic and heartbreaking news. He claimed that friendship was important in every aspect of life, except in the affairs of love. He said that all hearts in love, are blinded and therefore, no agent can be trusted as beauty is a witch, against whose charms, faith melts into blood. Claudio was a shattered man, devastated and distressed at the fact that his beloved Hero was not his any more, while Don John got a thrill out of the cascading effect his own craftsmanship. Another example for the theme of trickery, is much later when Benedick, recovered from his resentment towards Beatrice. Benedick was cleverly hiding behind the arbor, when they eyes of Don Pedro glance over him. ...read more.

He also began wondering about how she showed her fondness towards him. Act 2 was a prime example of the themes of trickery, deception and illusion, and illustrated these themes beautifully. On one hand there was the truth and reality, and on the other hand were illusions, misapprehensions and false understanding, leading to various reactions and building up to the plot. This created an atmosphere of suspense, anxiety and tension leaving innumerable questions unanswered. Will Beatrice realize Benedick loves her, and that he thinks she loves him as well? Will Don John malicious plot of making Claudio believe Hero is entertaining a man in her bedroom work out? How will Benedick and Beatrice eventually fall in love? Will all these queries unfold in Act 3? Act 2 unlike Act 1 was mostly based on the forming of the relationship between Benedick and Beatrice, while Act 1 was about Claudio and Hero. Who knows, Act 3 might reveal and unravel more secrets, deceptions and disguises, take us furtherer into the plot and get us closer and closer to the climax. ...read more.