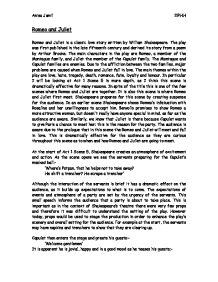 Romeo and Juliet Romeo and Juliet is a classic love story written by William Shakespeare. The play was first published in the late fifteenth century and derived its story from a poem by Arthur Brooke. The main characters in the play are Romeo, a member of the Montague family, and Juliet the member of the Capulet family. The Montague and Capulet families are enemies. Due to the affliction between the two families, major problems are caused when Romeo and Juliet fall in love. The main themes within the play are love, hate, tragedy, death, romance, fate, loyalty and honour. In particular I will be looking at Act 1 Scene 5 in more depth, as I think this scene is dramatically effective for many reasons. In spite of the title this is one of the few scenes where Romeo and Juliet are together. It is also this scene is where Romeo and Juliet first meet. Shakespeare prepares for this scene by creating suspense for the audience. In an earlier scene Shakespeare shows Romeo's infatuation with Rosaline and her unwillingness to accept him. Benvolio promises to show Romeo a more attractive woman, but doesn't really have anyone special in mind, as far as the audience are aware. Similarly, we know that Juliet is there because Capulet wants to give Paris a chance to meet her; this is the reason for the party. The audience is aware due to the prologue that in this scene the Romeo and Juliet will meet and fall in love. This is dramatically effective for the audience as they are curious throughout this scene as to when and how Romeo and Juliet are going to meet. At the start of Act 1 Scene 5, Shakespeare creates an atmosphere of excitement and action. As the scene opens we see the servants preparing for the Capulet's masked ball:- 'Where's Potpan, that he helps not to take away? ...read more.

Romance is also a strong theme within the play. Romeo speaks in rhyming couplets; this is dramatically effective as the rhyming couplets are poetic and also romantic. They also stand out from the other speech in the play, demonstrating Romeo's love for Juliet. Romeo also uses similes and metaphors to compare Juliet to the light and dark surrounding her. He also uses religious imagery which was popular in the Shakespearean period. This was because religious was a strong issue which everyone could relate to. These are a range of dramatic devices used by Shakespeare which make this soliloquy noticeably different from the language previously used in this scene. This brings out the beauty and romance of two destined lovers meeting and falling in love for the audience's enjoyment. Tybalt overhears Romeo's soliloquy and wants to take his life on the spot, but fortunately Capulet intervenes. Shakespeare creates effective drama by introducing a confrontation between Capulet and Tybalt at this point in the scene. This is dramatic as the audience are expecting something bad to happen, so when they see Tybalt's anger they fear he is going to kill Romeo. The effect of this is that the romantic atmosphere Romeo has created is quickly ruined. It is also dramatically effective as it builds up tension and makes Romeo and Juliet's meeting more jovial, as it is a relief after all the anger. Another reason this confrontation is dramatic is that we see two members of the same family arguing. The audience are used to seeing the opposite families so this is unusual for them. Tybalt also speaks in rhyming couplets as Romeo:- 'I will withdraw: but this intrusion shall Now seeming sweet convert to bitter gall' I think it is significant that Tybalt speaks in rhyming couplets like Romeo. It shows he has overheard Romeo speaking in rhyming couplets. I think Shakespeare uses this dramatic device to compare Tybalt to Romeo; Tybalt's anger and hatred to the way Romeo falls in love with Juliet at first sight. ...read more.

Too early seen unknown, and known too late! Prodigious birth of love it is to me That I must love a loathed enemy' The contrast of the themes love and hate are mentioned again in juxtapositions along with the early and late and unknown and known. This shows how Juliet is feeling am moment ago she met the love of her life and was happy and now she knows he is her family's enemy and they cannot be together. This is dramatically effective as the audience are unsure if Romeo's premonition has become true. Although it seems this was a happy occasion they know that their families would never let them be. I think this scene is dramatically effective as Shakespeare succeeds in maintaining tension and drama throughout the scene. The main part is Romeo and Juliet's meeting with the romance that has been well awaited. Capulet is also an important character in this scene as when he arrives we are amazed at his personality change and his attempt to keep clam with Tybalt. Tybalt brings drama to the scene as he is furious at Romeo and wants to kill him, he argues with Capulet trying his patients to the limit. The scene ends with a cliff hanger as the audience have seen Romeo and Juliet meet but know that their families would not approve. We also know that this new love is 'death marked love'. This makes the audience want to watch the rest of the play. I think the tension in this scene would still appeal to the modern audience. The character of Capulet still exists today a respectful gentleman with high public importance; however his sharp temper gets the better of him. Tybalt could be associated with an over protective brother, protecting his sister from heartbreaking boyfriends, perhaps a little dramatic. The religious imagery would perhaps not be as effective today but may still be appreciated by some. The love at first sight may not be so common today, however Juliet's resistance to Romeo can still connect to audiences today. ?? ?? ?? ?? Anisa Jamil 11PHH ...read more.