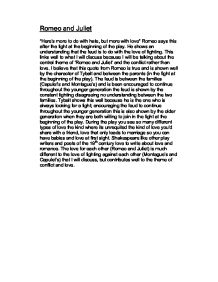 Romeo and Juliet "Here's more to do with hate, but more with love" Romeo says this after the fight at the beginning of the play. He shows an understanding that the feud is to do with the love of fighting. This links well to what I will discuss because I will be talking about the central theme of 'Romeo and Juliet' and the conflict rather than love. I believe that this quote from Romeo is true and is shown well by the character of Tybalt and between the parents (in the fight at the beginning of the play). The feud is between the families (Capulet's and Montague's) and is been encouraged to continue throughout the younger generation the feud is shown by the constant fighting disagreeing no understanding between the two families. Tybalt shows this well because he is the one who is always looking for a fight; encouraging the feud to continue throughout the younger generation this is also shown by the older generation when they are both willing to join in the fight at the beginning of the play. During the play you see so many different types of love the kind where its unrequited the kind of love you'd share with a friend, love that only leads to marriage so you can have babies and love at first sight. ...read more.

Juliet doesn't really have a relationship with her mother. The nurse is more like a mother to Juliet, always there when Juliet needs someone to talk to, confine in, share all her hopes and dreams with. In the play you see Juliet and her mother have a conversation twice maybe three times whereas you'll always see her speaking with the nurse. When you see Juliet and her mother have a conversation in the play they are always talking about Juliet get married (to Paris). There are moments in the conversations where the nurse will speak for Juliet and times when Juliet will be told that she'll get married not getting a choice whether she wants to or not. This could make Juliet want to rebel against the actions of her mother and father. In act 3 scene 5 Lord Capulet talks to Juliet in a way which would make Juliet feel small so she would do what her father would tell her he says 'out, you green-sickness carrion! Out, you baggage! You tallow-face!' Making her feel small and ugly. The internal conflict shows that the love between Romeo and Juliet is torn between the head and the heart. They both know that it is wrong to do what they are doing because their families are at war, but still love each other. ...read more.

When the nurse talks she always talks in prose. She always goes off the point and comes out with unintentional phrases. ' There stays a husband to make you wife' The love between Paris and Juliet is forced. It was a traditional way with love he would have to woo Juliet by going through her father. Paris sees Juliet more as property than he does wife he says ' thy face is mine, and thou hast slandered it'. This would be an old fashioned way of talking to someone as if it were an object. Juliet doesn't get a choice whether she wanted to marry this man or not; it was tradition that her parents picked the man she married. If Juliet married him it would make the Capulet name look good. Romeo and Juliet were young they were in love they saw it as love at first sight. Everything Romeo and Juliet did dominated by their love for each other. They couldn't bear to be separated and in that thought always referred to death 'that murdered me. I would forget it fain' Juliet says this after finding out that Tybalt was killed and Romeo was banished. There love was forbidden because of the feud between the families. The way Romeo and Juliet talk I in a sonnet. The central theme could be love or conflict. Love because of Romeo and Juliet but the deaths of the young lovers end in feud. ...read more.