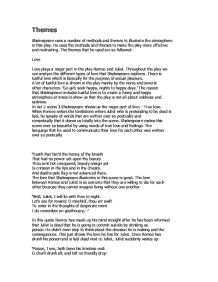 Themes Shakespeare uses a number of methods and themes to illustrate the atmosphere in this play. He uses the methods and themes to make the play more effective and motivating. The themes that he used are as followed: Love Love plays a major part in the play Romeo and Juliet. Throughout the play we can analyze the different types of love that Shakespeare explores. There is lustful love which is basically for the purpose of sexual pleasure. A lot of lustful love is shown in the play mainly by the nurse and several other characters. 'Go girl; seek happy, nights to happy days.' The reason that Shakespeare includes lustful love is to create a funny and happy atmosphere at times to show us that the play is not all about coldness and sadness. In Act 5 scene 3 Shakespeare shows us the major part of love - True love. When Romeo enters the tombstone where Juliet who is pretending to be dead is laid, he speaks of words that are written ever so poetically and romantically that it draws us totally into the scene. ...read more.

There is also happiness when we are shown the two lovers; Romeo and Juliet kissing passionately and are planning to get to get married. The mood here changes to joy and relief. Misunderstanding/ Confusion The misunderstanding here is that Paris completely thought the wrong reason of Romeos presence and he refused to listen. When we read this we start to think 'If only Paris knew' or if only Romeo didn't start a fight. This is exactly what Shakespeare wants us to think like and it certainly worked throughout the whole scene. Romeo then moves to the tombstone where Juliet is laid and speaks to her as if she was still alive. 'For here lies Juliet, and her beauty makes This vault a feasting presence full of light. Death, lie thou there, by a dead man interr'd.' The atmosphere here sounds as if it's a fascinating scene with loads of light and colours even though the scene is taking place in a place of death and doom. This creates a pleasant imagery when it's supposed to be dark and gloomy where the dead are buried. ...read more.

The quote shows religious imagery, disappointment and grief. Romeo feels as if he has been let down by the stars and God because he believes that it was not fair to take away the life of such a young girl who had a whole future to look forward to. All the odd things that have been happening to the young couple shows the lack of fate and belief even though they had a strong believe in religion. I have just explained the themes that Shakespeare uses in order to make the play more effective and illustrate the atmosphere. Now I will be doing exactly the same but use instead of themes I will use the methods that Shakespeare has used. Religious imagery Throughout the whole play we are shown the religious imagery that the characters had within them. In the time that the play was set people were extremely religious and believed in fate. Shakespeare shows a lot of religious imagery as its one of the main methods to show the identity of the characters. Each and one of the characters have a strong believe. For example, Romeo. In act 5 scene 3 Romeo admits that he has committed many sins and is trying to avoid committing anymore. 'Put not another sin upon my head,' ...read more.