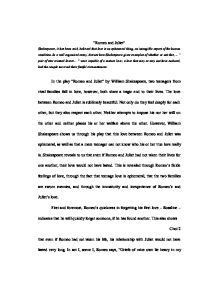 "Romeo and Juliet" Shakespeare, it has been said, believed that love is an ephemeral thing, an intangible aspect of the human condition. In a well organized essay, discuss how Shakespeare gives examples of whether or not this, ..." pair of star crossed lovers... " were capable of a mature love; a love that may or may not have endured, had the couple survived their fateful circumstances. In the play "Romeo and Juliet" by William Shakespeare, two teenagers from rival families fall in love, however, both share a tragic end to their lives. The love between Romeo and Juliet is sublimely beautiful. Not only do they feel deeply for each other, but they also respect each other. Neither attempts to impose his nor her will on the other and neither places his or her welfare above the other. However, William Shakespeare shows us through his play that this love between Romeo and Juliet was ephemeral, as well as that a mere teenager can not know who his or her true love really is. ...read more.

After Rosaline departs from Romeo, he is sad and struck with grief; "Why, such is love's transgression. Griefs of mine own lie heavy in my breast, which thou wilt propogate, to have it prest with more of thine" (777). This is how Romeo feels before he meets Juliet; he also tells Benvolio that Rosaline was his only true love. However, even though he felt that Rosaline was his one and only true love, after meeting Juliet, everything changed; and soon after, he is married to Juliet. Choi 3 Next, Romeo and Juliet would not have been able to continue their relationship, because the two families would do anything in order to cancel the marriage. Throughout the play, it is shown that the two families fight each other with the utmost hatred. For instance, in the opening, the two families are willing to fight to the death. "My sword, I say! Old Montague is come and flourishes his blade in spite of me... Thou villain Capulet! - hold me not; let me go" (773). ...read more.

And yet not fall; so light is vanity... ah Juliet, if the measures of thy joy be heaped like mine, and that thy skill be more to blazon it... Till Holy Church incorporate two in one" (Shakespeare 815). This secret and quick marriage reveals that Romeo and Juliet act in the spur of the moment and that they might not think of what will happen in the future. Moreover, even if Romeo and Juliet had not taken their lives, their relationships would not have lasted very long. Although Romeo and Juliet's love for each other was very strong, they are young and therefore, unable to truly love someone, or tell that they are their true love. In this play, Shakespeare shows us that love is ephemeral, and that a teenager is not capable of knowing who their true love is. So, even if Romeo and Juliet had not taken their lives, they would not have been able to continue their relationship and have a mature love. Young people should all learn that at first, it may seem that they have found their true love. However, in the end, it may not be true. Thus, teenagers should not act foolishly, and think logically reasonably before they act. ...read more.