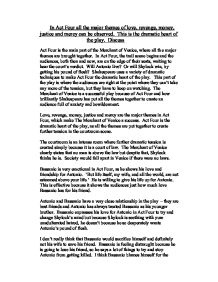 In Act Four all the major themes of love, revenge, money, justice and mercy can be observed. This is the dramatic heart of the play. Discuss Act Four is the main part of the Merchant of Venice, where all the major themes are brought together. In Act Four, the trail scene begins and the audiences, both then and now, are on the edge of their seats, waiting to hear the court's verdict. Will Antonio live? Or will Shylock win, by getting his pound of flesh? Shakespeare uses a variety of dramatic techniques to make Act Four the dramatic heart of the play. This part of the play is where the audiences are right at the point where they can't take any more of the tension, but they have to keep on watching. The Merchant of Venice is a successful play because of Act Four and how brilliantly Shakespeare has put all the themes together to create an audience full of anxiety and bewilderment. Love, revenge, money, justice and mercy are the major themes in Act Four, which make The Merchant of Venice a success. Act Four is the dramatic heart of the play, as all the themes are put together to create further tension in the courtroom scene. The courtroom is an intense room where further dramatic tension is created simply because it is a court of law. ...read more.

Shylock wants justice to be done. He wants his bond to be granted - he wants to walk away from the courtroom scene, with the pound of flesh. Antonio's digmified behaviour in court lets the audience know that he is accepting his fate and he knows that justice has been done. Nobody on stage knows that Antonio can't die, except for Portia. Moreover, none of the characters know that Portia and Nerissa are disguised as men, trying to save Antonio's life. Portia emphasises that Shylock will have justice - and catches him out as she knows that Antonio will live. The dignity and finality in the courtroom is too much to take in for tha audience. They are waiting nervously for the verdict, knowing in their hearts that Antonio will die when really he won't. The most crucial theme in Act Four is mercy. The Duke, Gratiano and Portia all plead with Shylock to show mercy but the audience know that he will refuse. 'The quality of mercy is not strained: It droppeth as the gentle rain from heaven. Upon the place beneath. It is twice blessed: It blessed him that gives, and him that takes.' This is effective because it lets the audiences know that all the characters on stage are pleading with Shylock to show mercy. ...read more.

Portia declares that because Shylock wanted to see Antonio dead, Venice can have half of Shylock's assets and Shylock can be hanged at the Duke's will. But, Shylock is shown mercy, as the Duke spares his life. Furthermore, a compromise is finally reached. Antonio suggests that Shylock should indeed lose half his possessions to Venice and the other half should go to his daughter upon his death. Shylock is shown mercy. The Duke doesn't have him hanged but he must become a Christian. Shylock is a successful Jewish moneylender who cares dearly about his religion, so when Shylock hears that he has to become a Christian, he can't believe it. Nevertheless, the decision is that he becomes a Christian or he gets hanged. So, Shylock decides to become a Christian, even though he doesn't want to. After the trail scene is over, Shylock isn't seen anymorein the play. I think that in Act Four all the major themes are involved in creating the dramatic tension. All the suspense and tension is too much to take in Act Four, which is why I think The Merchant of Venice is a great, successful comedy play. Act Four is the most dramatic part of the play and all the other acts before it have more or less been leading all the tension into the courtroom scene. The Merchant of Venice is a play to be remembered, as the atmosphere is so tense, especially in Act Four. ...read more.