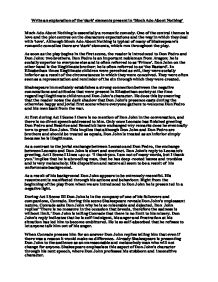 Write an exploration of the 'dark' elements present in 'Much Ado About Nothing' Much Ado About Nothing is essentially a romantic comedy. One of the central themes is love and the plot centres on the characters expectations and the way in which they deal with 'love'. Although Much Ado About Nothing is typical of many of Shakespeare's romantic comedies there are 'dark' elements, which run throughout the play. As soon as the play begins in the first scene, the reader is introduced to Don Pedro and Don John: two brothers. Don Pedro is an important nobleman from Aragon; he is socially superior to everyone else and is often referred to as 'Prince'. Don John on the other hand is the illegitimate brother; he is often referred to as 'the Bastard'. In Elizabethan times illegitimate children were perceived as evil, they were socially inferior as a result of the circumstances in which they were conceived. They were often seen as a representation and reminder of the sin through which they were created. Shakespeare immediately establishes a strong connection between the negative connotations and attitudes that were present in Elizabethan society at the time regarding illegitimate children and Don John's character. ...read more.

His disposition and nature all seem to be a result of his unfortunate background. As a result of his background Don John appears to be extremely resentful. His resentment is manifested through his actions and behaviour. Right from the beginning of the play from when we are introduced to Don John he is presented in a negative light. During Act I Scene III Don John is in the company of one of his followers and companions, Conrade. During this scene Shakespeare reveals Don John's unpleasant nature. Conrade asks Don John why he is so miserable and dejected. Don John replies' 'There is no measure in the occasion that breeds, therefore the sadness is without limit.' Don John is telling Conrade that there is no limit to his misery. Don John's reply indicates that he is self-indulgent, his anger and frustration at his situation has led him to become embittered. He is so self-absorbed that he refuses to let anyone talk him out of his anger. When Conrade presses him for an answer Don John replies telling him that even if there was a reason it would make no difference. ...read more.

If there were no marriage, if marriage did not exist, he would not have to endure the ridicule and degradation that he suffers at this moment. As well as Don John's 'plain dealing villain' there are other elements of darkness throughout the play. Shakespeare uses the device of deception in different instances to show the reader that all is not as it seems, and often judgements made on observations are wrong. There are two main instances where the plot involves deception and deceit. Firstly there is the plot to bring Beatrice and Benedick together and second there is the more malicious plot, devised by Don John, to ruin Claudio's marriage to Hero. The whole farce through which Benedick and Beatrice are eventually brought together and led to reveal their true feelings for one another is carried out using the device of deception. Although there is no malicious intent, the act of deception its self is negative as it is based on playing with people's feelings. The same principle whereby the characters are led to believe something through small snippets of information that they have heard and been given. None of the information on which they base their beliefs is true. In most cases this is never ...read more.