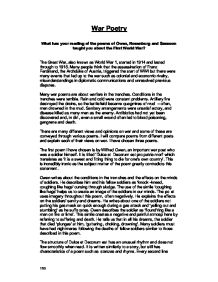 Teachings of WWI through poems

War Poetry What has your reading of the poems of Owen, Rosenburg and Sassoon taught you about the First World War? The Great War, also known as World War 1, started in 1914 and lasted through to 1918. Many people think that the assassination of Franz Ferdinand, the Archduke of Austria, triggered the start of WWI but there were many events that led up to the war such as colonial and economic rivalry, misunderstandings in diplomatic communications and unresolved previous disputes. Many war poems are about warfare in the trenches. Conditions in the trenches were terrible. Rain and cold were constant problems. Artillery fire destroyed the drains, so the battlefield became quagmires of mud - often, men drowned in the mud. Sanitary arrangements were unsatisfactory, and disease killed as many men as the enemy. Antibiotics had not yet been discovered and, in dirt, even a small wound often led to blood poisoning, gangrene and death. There are many different views and opinions on war and some of these are conveyed through various poems. I will compare poems from different poets and explain each of their views on war. ...read more.

Irony is a huge part of this poem and the most important part of the poem is the last line that says 'The old lie: Dulce et decorum est pro patria mori.' At this point, Wilfred Owen reveals his opinion of the saying by referring to it as a lie. The next poem I have chosen is Siegfried Sassoon's 'Does it matter?' In this poem, Sassoon uses the rhetorical question 'does it matter?' at the beginning of each stanza. The poem is particularly about injuries and harm caused during war, both physical and psychological. This poem is also very ironic, similar to 'Dulce et Decorum est'. Sassoon uses irony to convey his hatred towards war. He asks 'Does it matter? - losing your legs?' He achieves a very sadistic mood to the poem without using any negative language. He continues to say 'For people will always be kind' which is quite a positive thought. However, irony transforms these words into a painful and depressing thought. Again in the second stanza he uses this technique and asks 'Does is matter? ...read more.

This poem is very symbolic of war. Rosenburg makes a reference to poppies which strongly symbolise war, life and blood (colour). He also makes a reference to No Man's Land ('sleeping green') which was the most dangerous part of trench warfare. 'Break of day in the trenches' only has one stanza whereas the poems of Owen and Sassoon each have several stanzas. It can also be read as a story rather than a poem, similar to 'Dulce et Decorum est' as it doesn't have a particular rhythm or rhyme. Rosenburg also has a negative view on war as he refers to 'whims of murder' and 'the torn fields of France', referring to the result of war on land. The poem has a sorrowful atmosphere. Rosenburg indicates his feelings towards rivalry and hatred between two sides (i.e. English and German hand) and by doing this, emphasises how much power war has over men. The phrase 'the darkness crumbles away' shows that day is dreaded by men as it means another day of killing and senseless violence. I think that this poem teaches us about how war can make someone so mindless and na�ve to human nature as it can make some people kill a person based on their nationality or beliefs. ?? ?? ?? ?? 11B ...read more.