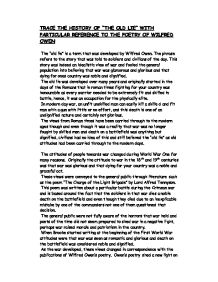 TRACE THE HISTORY OF "THE OLD LIE" WITH PARTICULAR REFERENCE TO THE POETRY OF WILFRED OWEN The "old lie" is a term that was developed by Wilfred Owen. The phrase refers to the story that was told to soldiers and civilians of the day. This story was indeed an idealistic view of war and fooled the general population into believing that war was glamorous and glorious and that dying for ones country was noble and dignified. The old lie was developed over many years and originally started in the days of the Romans that in roman times fighting for your country was honourable as every warrior needed to be extremely fit and skilled in battle, hence, it was an occupation for the physically elite. In modern day war, an unfit unskilled man can easily kill a skilled and fit man with a gun with little or no effort, and this death is one of an undignified nature and certainly not glorious. The views from Roman times have been carried through to the modern ages though and even though it was a reality that war was no longer fought by skilled men and death on a battlefield was anything but dignified, civilians had no idea of this and still believed the "old lie" as old attitudes had been carried through to the modern days. The attitudes of people towards war changed during World War One for many reasons. Originally the attitude to war in the 18th and 19th centuries was that war was glorious and that dying for your country was a noble and graceful act. These views were conveyed to the general public through literature such as the poem "The Charge of the Light Brigade" by Lord Alfred Tennyson. This poem was written about a particular battle during the Crimean war and is based around the fact that the soldiers in that war dies a noble death on the battlefield and even though they died due to an inexplicable mistake by one of the commanders not one of them questioned that decision. ...read more.

The fact that dying for one's country means so much for that person but that love from the country is unrequited; as far as the country is concerned the soldier is only another figure that can be added to the death toll. The title of the poem, "Anthem for Doomed Youth" has had the word "anthem" been put into the title as the word anthem is there to inform the reader that this is what is most likely to happen to a soldier that joins the army, that is, an anthem for their life at the army that always ends in a gruesome undignified death. The significance of the word "doomed" in the poem, "Anthem for Doomed Youth", is that Owen is trying to convey to the reader that the soldiers are doomed for a horrible undignified death before they have even set off for battle; there is no solace or escape for those that enter the path of war. In Owen's first draft of this poem the title was, "Anthem for Dead Youth". This title is less striking than the title that it was later changed to which was, "Anthem for Doomed Youth". The original title was less striking because it refers to the past tense, that is, the word "dead". This word is not as striking as "doomed" because if the soldiers are already dead the reader will not feel personally connected, hence, will not evoke as strong emotions. They way that Wilfred Owen uses the word "doomed" in order to suppress the number of people joining the army, Rupert Brooke and Alfred Tennyson use language for the opposite effect, to promote going to war. For example, in the poem, "The Soldier" by Rupert Brooke, the line "if I should die" comes to mind. The word "if" is used in this poem for contrasting effect to the word "doomed" in "Anthem for Doomed Youth". ...read more.

This attitude has slowly shifted towards one where war is seen as sickening and death on the battlefield was seen a undignified and that a cowardly fighter could no easily kill a much more skilled warrior from miles away and that no honour or dignity can be seen in that. Tennyson represented the view that war was absolutely glorious and that any soldier who died in battle would die a dignified and valorous death. He represented he view that war was a great event where anyone who died in battle would be rewarded and that their name would live on forever. And Brooke represented the view that war was still glorious but people were beginning to realise it was not as serene as they thought it would be. The general view of war was that it was heroic, brave, noble, glorious and dignified for a soldier to go into battle though less and less people still believed that. Owen represented the view that war was horrific and that death on the battlefield was both inhumane and undignified and that any man could kill any man without having to put up a brave fight, hence, battle has lost any honourable meaning and is sickening and there is a pointless waste of innocent lives. In conclusion, through critical analysis of poems by Rupert Brooke, Lord Alfred Tennyson and Wilfred Owen I have discovered that the general view on war has progressed from the times of Tennyson when war was considered noble, glorious and dignified. These views have progressed to the other end of the spectrum when at the time when Wilfred Owen was writing his poetry; Tennyson's views were dispelled by Owen as the "old lie". The modern view on war bought about through the poetry of Wilfred Owen was that war and death on the battlefield was undignified, pointless and gruesome. All these views from every poet was conveyed to the reader through literature, that is, poetry, and poetry provides a good example of how views of war have changed over time and how the "old lie" is now obsolete. SUNIL SUTARIA 10DL ...read more.