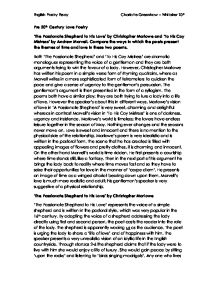 Pre 20th Century Love Poetry 'The Passionate Shepherd to His Love' by Christopher Marlowe and 'To His Coy Mistress' by Andrew Marvell. Compare the ways in which the poets present the themes of time and love in these two poems. Both 'The Passionate Shepherd' and 'To His Coy Mistress' are dramatic monologues representing the voice of a gentleman and they are both arguments trying to win the favour of a lady. However, Christopher Marlowe has written his poem in a simple verse form of rhyming quatrains, where as Marvell writes in a more sophisticated form of tetrameters to quicken the pace and give a sense of urgency to the gentleman's persuasion. The gentleman's argument is then presented in the form of a syllogism. The poems both have a similar ploy; they are both trying to lure a lady into a life of love. However the speaker's about this in different ways. Marlowe's vision of love in 'A Passionate Shepherd' is very sweet, charming and delightful whereas in contrast Marvell's vision in 'To His Coy Mistress' is one of darkness, urgency and insistence. Marlowe's world is timeless; the lovers have endless leisure together in the season of May. Nothing ever changes and the seasons never move on. Love is sweet and innocent and there is no mention to the physical side of the relationship. Marlowe's poem is very idealistic and is written in the pastoral form. ...read more.

The nymph indicates that she won't be persuaded because she is sceptical that his ideal could ever exist. She also doubts whether the shepherd is telling her the truth. 'If all the world and love were young And truth is in every shepherd's tongue' She rejects the shepherd's many offers mainly because she rejects his timeless world. She knows that time will change everything; she believes winter will come and then no-one will be able to sit on rocks and listen to bird song. 'Time drives the flocks from field to fold When rivers rage and rocks grow cold' Raleigh's nymph considers each of the shepherd's gifts and promises. She declares that time will wither or ruin them all. None of the gifts would be fit to last 'The flowers do fade, and wanton fields To wayward winter yields;' The gifts are a pretty but impossible fiction. Just as 'The Passionate Shepherd' urges the lady three times, Raleigh's nymph considers ad rejects his offer three times, in the first, the penultimate and the final stanzas. Her rejection is very emphatic in the penultimate stanza. 'All these in me no means can move To come to thee and be thy love' The mood and tone of the nymph changes in the final stanza, there is a note of sadness and regret. She recognises the sweetness and almost pleading of the shepherd's fantasy. However, she realises that reality is still there and that it is so much harsher. ...read more.

She needs to be vigorous and active. Finally, the gentleman speaker adds a last playful ironic comment. He mocks the idea that lovers can make time 'stand still'. However, he suggests to the lady that through their love they can make time speed up as they live life to the full and get the most out of every minute in the form of 'carpe diem'. Marlowe's ad Marvell's poems both focus on time. However, Marlowe's poem is timeless. It centres on a world that is endless, it is full of luxury and you can live in happiness for eternity. Marvell's poem starts off with a fantasy much the same but this jus to later contrast with the main feature of dark urgency to the rest of the poem. Marvell's poem has images where time is catching up with you can you have to act fast to enjoy things while you can. Both poems also focus strongly on love. They are both persistent in luring a lady to fall in love with them. Marlowe's poem is innocent and sweet; the poet uses gifts and charming scenery and sounds to bribe the lady into loving the gentleman whereas in Marvell's poem the love is more urgent and passionate. The love in Marvell's poem is more adult and more suggestive of a physical relationship. Marlowe's style and language is much simpler but Marvell's style is sophisticated and the language he uses much more elaborate and complex. Marlowe's poem is delightful and brighter, Marvell's poem is deeper and more insistent. ?? ?? ?? ?? English Poetry Essay Charlotte Greenhow - Whitaker 10P ...read more.