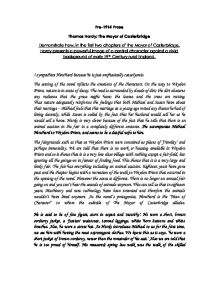 Thomas Hardy: The Mayor of Casterbridge

Demonstrate how, in the first two chapters of The Mayor of Casterbridge, Hardy presents a powerful image of a central character against a vivid background of early 19th Century rural England.

I sympathize Henchard because he is just emphatically cataclysmic.

The setting of the novel reflects the emotions of the characters. On the way to Weydon Priors, nature is in state of decay. The road is surrounded by clouds of dirt; the dirt obscures any radiance that the grass might have; the leaves and the trees are rotting.                             Thus nature adequately reinforces the feelings that both Michael and Susan have about their marriage – Michael feels that this marriage at a young age rotted any chance he had of living decently, while Susan is soiled by the fact that her husband would sell her as he would sell a horse. Hardy is very clever because of the fact that he tells that there is an animal auction in the fair in a completely different sentence. She accompanies Michael Henchard to Weydon-Priors, and seems to be a dutiful wife to him.

The fairgrounds such as that at Weydon Priors were conceived as places of ‘frivolity’ and perhaps immorality. We are told that there is no work or housing available in Weydon Priors and so it shows that it is a very low class village with nothing except a fair-field, but ignoring all the goings-on in favour of finding food. This shows that it is a very large and lively fair. The fair has everything including an animal auction. Eighteen years have gone past and the chapter begins with a recreation of the walk to Weydon Priors that occurred in the opening of the novel. However the scene is different. There is no longer an annual fair going on and you can’t hear the sounds of animals anymore. This can tell us that in eighteen years, Machinery and new technology have been invented and therefore the animals wouldn’t have lived anymore. As the novel’s protagonist, Henchard is the “Man of Character” to whom the subtitle of The Mayor of Casterbridge alludes.

He is said to be of fine figure, stern in aspect and 'swarthy'. He wore a short, brown corduroy jacket, a 'fustian' waistcoat, tanned leggings, white horn buttons and white breeches. Also, he wore a straw hat. As Hardy introduces Michael to us for the first time, we see him with having the most extravagant clothes. We know this as it says, ‘he wore a short jacket of brown corduroy, newer than the remainder of his suit.’ Also we are told that he is too proud of himself. His measured; spring less walk was the walk of the skilled countrymen.’

Even though Hay trussing is a very ‘low-class’ profession, yet Michael has a very high opinion of himself.

As a young man, Henchard is volatile, headstrong, and passionate. Even before Henchard works himself into a fury in the furmity tent, Susan’s meek behaviour as she walks along beside him (“she kept as close to his side as was possible without actual contact”) implies his volatile and potentially violent nature.

Michael, the drunken husband, is not seen as an animal, but his physical appearance hints at his inner nature. He is a tall man "of fine figure." This outward goodness is reflected in his haste to get food for his family and his asking about employment and lodging.  Yet he will frequently show his darker side as a sharp contrast to his goodness. Just as he is dark and "swarthy" while he is of a fine figure, he does harsh things while he behaves admirably.

He searches for food for the family, then wants to drink himself into a state and actually sells his wife and child.

The events that take place in the furmity tent at the fair demonstrate a cycle into which Henchard falls frequently throughout the novel. After finding himself in a shameful situation—this time, having sold his wife and child—he takes full responsibility for his mistakes and sets out to correct them. In fact, his desire to make amends is overpowering.

He spends several months searching for his wife and child, proving that his remorse is not half-hearted. This audacious spirit is a hallmark of Henchard’s character, as he switches quickly from ungrateful misogyny to sincere penitence. Ultimately, though, critics have remained interested in Henchard because his success in atoning for his transgressions is ambiguous.

Although Henchard’s search for his wife seems to be an example of honest contrition, his true motivation is more likely concern over his personal honour.

His interest in his good name plays a significant role in his sacrifice of personal satisfaction when he swears off alcohol and determines to find his wife. Before he begins to search the English countryside for his wife and child, he reflects that it is not his own but rather his wife’s “idiotic simplicity” that has brought disgrace on him.

As he stands outside the fairgrounds at Weydon-Priors, anxiously wondering whether he revealed his name to anybody in the furmity tent, Henchard displays an obsession with public opinion concerning his character that greatly shapes his actions and personality. Critic Irving Howe refers to this trait as Henchard’s “compulsive and self-lacerating pride.”