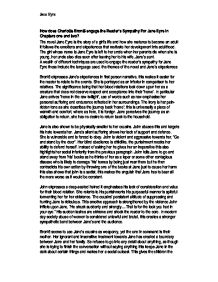 How does Charlotte Bront engage the Readers Sympathy For Jane Eyre in Chapters one and two?

How does Charlotte Bront� engage the Reader's Sympathy For Jane Eyre in Chapters one and two? The novel Jane Eyre is the story of a girl's life and how she matures to become an adult it follows the emotions and experiences that motivate her development into adulthood. The girl whose name is Jane Eyre is left to her uncle when her parents die when she is young, her uncle also dies soon after leaving her to his wife, Jane's aunt. A wealth of different techniques are used to engage the reader's sympathy for Jane Eyre these include the language used, the themes of the novel and Jane's experiences Bront� expresses Jane's experiences in first person narrative, this makes it easier for the reader to relate to the events. She is portrayed as an inferior in comparison to her relatives. The significance being that her blood relations look down upon her as a creature that does not deserve respect and acceptance into their 'home'. In particular Jane arrives 'home in the raw twilight', use of words such as raw emphasise her personal suffering and endurance reflected in her surroundings. The irony is her pain-ridden tone as she describes the journey back 'home'; this is universally a place of warmth and comfort, where as here, it is foreign. ...read more.

Se refuses to go into any detail about anything, as though she is trying to finish the conversation without saying anything this keeps Jane in the dark about certain things and makes her a social outcast. This gives the children the idea that because there mother doesn't care about Jane it means that it is okay to torture and goad her, "Eliza, John and Georgiana were now clustered around their mama" Jane is not included in this gathering, this shows how little Mrs Reed cares for her niece, by not including Jane their neglect for her steadily increases until she becomes completely obsolete for them. Whenever Jane questions her benefactress' decision she gets cut off and called a "caviller and questioner". Mrs reed states that she regrets to keep her at a distance until she behaves herself; Jane asks, "What does Bessie say I have done" this implies that there is an underlying sense of respect as the question is not directly impudent, she is not being rude and just asking what have I done, she is doing it in a subtle way which denotes equal amounts of respect and fear even though Mrs Reed has done nothing to gain either of these things, in fact instead of answering Jane's question she chastises her for being impertinent and tells her to go ...read more.

Even the servants show Jane to be the troublesome child who is to blame. The servants are highly biased and they must listen to their masters and support them and Bessie and miss abbot were no different they talk about Jane as if she's not even there, "She's an underhand little thing" they say these kinds of things in front of Jane to discourage her from retaliating to Johns Taunts and even though she is not thought of as equal to her relatives she is thought of as even lower than the servants and due to this the servants think of her like this as well and so she is the lowe3st of the low with no one to help or support her. So in Conclusion Charlotte Bront� utilizes a whole wealth of procedures to provoke our sympathy for the character of Jane Eyre the main technique that she uses is the pain and suffering that she puts Jane through and then by writing it in first person she makes us understand it so that we are forced to feel her pain and this is enough to melt even the stoniest of hearts. I myself feel that Jane is an innocent character but I believe that Jane is not the main character and the story isn't just about her it is also as much about her relatives and the other characters as it is about her. Jane Eyre ...read more.

This student written piece of work is one of many that can be found in our GCSE Bronte Sisters section.