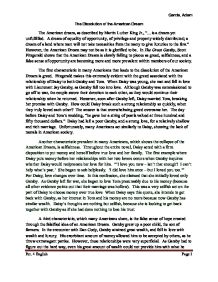 The Dissolution of the American dream in The Great Gatsby

The American dream, as described by Martin Luther King Jr., "...is a dream yet unfulfilled. A dream of equality of opportunity, of privilege and property widely distributed; a dream of a land where men will not take necessities from the many to give luxuries to the few." However, the American Dream may not be as it is glorified to be. In The Great Gatsby, Scott Fitzgerald shows that the American Dream is slowly falling to pieces as greed, selfishness, and a false sense of opportunity are becoming more and more prevalent within members of our society. The first characteristic in many Americans that leads to the dissolution of the American Dream is greed. Fitzgerald makes this extremely evident with the greed associated with the relationship of Daisy to both Gatsby and Tom. When Daisy was young, she met and fell in love with Lieutenant Jay Gatsby, as Gatsby fell too into love. ...read more.

"'I love you now - isn't that enough? I can't help what's past.' She began to sob helplessly. 'I did love him once - but I loved you too.'" For Daisy, love changes over time. In this confession, she claimed that she initially loved only Gatsby. As Gatsby left for war, she began to love Tom presumably due to his money (because all other evidence points out that their marriage was hollow). This was a very selfish act on the part of Daisy to choose money over true love When Daisy says this quote, she intends to get back with Gatsby, as her interest in Tom and his money are no more because now Gatsby has similar wealth. Daisy's thoughts are nothing but selfish, because she is looking to get back together with Gatsby as if she had done nothing to lose his trust. A third characteristic, which many Americans share, is the false sense of hope created through the falsified idea of an American Dream. ...read more.

This was the ultimate destruction of Gatsby and his view of the American Dream. An unstated understanding of the ideal "American Dream" implies that a person can attain anything through hard work and determination. Gatsby wants to believe that this American Dream will hold true in his life. He worked hard to attain his wealth and please Daisy, but to his disappointment, it was not enough to secure a happy future with Daisy. In conclusion, the American Dream, as defined by American society, is progressively falling apart as greed, selfishness, and falsified hopes are becoming more and more accepted by the members of our society. It is essential to be conscious that we are on the brink of slipping from our dream, and if we do not do something about it, we may put the future of the American people in jeopardy. ?? ?? ?? ?? Garcia, Adam The Dissolution of the American Dream Per. 4 English Page 1 ...read more.