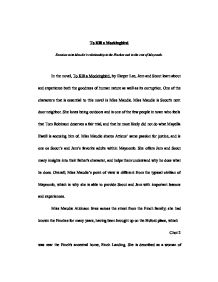 To Kill a Mockingbird Examine miss Maudie's relationship to the Finches and to the rest of Maycomb. In the novel, To Kill a Mockingbird, by Harper Lee, Jem and Scout learn about and experience both the goodness of human nature as well as its corruption. One of the characters that is essential to this novel is Miss Maudie. Miss Maudie is Scout's next door neighbor. She loves being outdoors and is one of the few people in town who feels that Tom Robinson deserves a fair trial, and that he most likely did not do what Mayella Ewell is accusing him of. Miss Maudie shares Atticus' same passion for justice, and is one os Scout's and Jem's favorite adults within Maycomb. She offers Jem and Scout many insights into their father's character, and helps them understand why he does what he does. Overall, Miss Maudie's point of view is different from the typical civilian of Maycomb, which is why she is able to provide Scout and Jem with important lessons and experiences. ...read more.

do, so when the "foot-washers" tell her that she will go to hell for gardening, they are hurting a mockingbird that is only doing what it is supposed to do. In addition, Miss Maudie is one of the few adults of Maycomb in which Scout and Jem hold high regards and respect for. Her role in both Scout and Jem's lives was essential in them learning and experiencing the goodness of human behavior such as kindness, courage, and humor. The best example of this is when Miss Maudie's house burned down. "'You ain't grievin' Miss Maudue?' I asked, surprised. Aticus said her home was nearly all she had. 'Grieving, child? Why, I'd hated that old cow barn. Thought of setting fire to it a hundred times myself - except they'd lock me up... Don't worry about me Jean-Louise Finch, there are ways of doing things that you don't know about." (73). Her positive outlook and optimism at first confuses Scout, but later, realizes that Miss Maudie has a tremendous amount of courage and learnes to keep an optimistic outlook throughout the course of the novel. ...read more.

Although a majority of Maycomb's population is prejudice, Miss Maudie does not follow the same morals, and believes that black people are their equals. She believes that Tom Robinson was not guilty and in fact did not commit whatever crime Mayella Ewell accused him of. Thus, Miss Maudie is an Choi 5 individual who is capable of deciding for herself, what the moral thing to do is. Therefore, Miss Maudie was a very important adult figure in both Scout and Jem's life. She provided them with many different explanations and reasons to why people do things, that in part shape Scout's and Jem's character. Although Miss Maudie lives amongst a racist southern town, her views on equal rights are completely different from that of Maycomb. She upholds her own upright morals and shows an immense amount of courage throughout the novel. In addition, her positive outlook on life and her overall optimism allow her to be someone who may have had a positive influence on the rest of Maycomb. Although she is a minor character, we should still strive to have some aspect of Miss Maudie's morals and outlook on life within us throughout our everyday lives. ...read more.