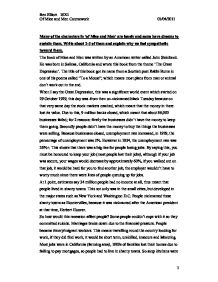 Of Mice and Men English language

Many of the characters in 'of Mice and Men' are lonely and some have dreams to sustain them. Write about 2-3 of them and explain why we feel sympathetic toward them. The book of Mice and Men was written by an American writer called John Steinbeck. He was born in Salinas, California and wrote this book from the theme 'The Great Depression'. The title of this book got its name from a Scottish poet Rabbi Burns in one of his poems called "To a Mouse"; which means most plans from man or animal don't work out in the end. When I say the Great Depression, this was a significant world event which started on 29 October 1929, this day was-from then on-nicknamed black Tuesday because on that very same day the stock markets crashed, which meant that the money in there lost its value. Due to this, 9 million banks closed, which meant that about 86,000 businesses failed; for 2 reasons: firstly the businesses didn't have the money to keep them going. Secondly people didn't have the money to buy the things the businesses were selling. Because businesses closed, unemployment rate increased, in 1929, the percentage of unemployment was 3%. However in 1934, the unemployment rate was 26%+. This shows that there was a big rise for people losing jobs. By saying this, you must be honoured to keep your job (most people lost their jobs), although if your job was secure, your wages would decrease by approximately 60%, if you walked out on that job, it would be hard for you to find another job, the employer wouldn't have to worry much since there were lines of people queuing up for jobs. At 1 point, estimates say 34 million people had no income at all, thus meant that people lived in shanty towns. This not only was in the small cities, but developed in the major states such as New York and Washington D.C. ...read more.

He wasn't like this before because he couldn't see any future, he had nothing to look forward to. His future seemed horrible "they'll can me purty soon as I can't swamp out no bunk houses they'll put me on the county" he tells Lennie and George that he's going to a county, no friends, no family, no entertainment, simple life, horrible experience. Finally I found out that has got more confident when talking to Curleys' wife when he backs up Crooks "if you was to do that, we'd tell" "we'd tell you up about you framing Crooks" he wouldn't have done this before because it is the bosses sons wife that he is talking to and he would be sacked- and he cannot afford that to happen because he hasn't got no place else to go, he had to rely on his boss to permit him to work on the ranch and he is quite confident that he his future is going to happen, so now he doesn't care about being sacked, the fear of being sacked has left him. When Lennie kills Curleys' wife the dream that Candy was looking forward to have come to an end, Candy was really relying on that dream, it's made him more lively, it's helped him join in with the other people ("glove fulla Vaseline") now Curleys' wife's death has caused this dream to fail. I know this from when he says to Curleys' wife's corpse "you done it di'nt you? I s'pose you're glad. Ever'body knowed you'd mess things up. You wasn't no good, you ain't no good now, you lousy tart" to say something like this to a dead body is highly disrespectful, like stealing candy from a baby it isn't acceptable because it is impolite. But all of his anger has caused him to strengthen up; become more confident, when he says "if they was a circus or a baseball game... ...read more.

thing is that the men don't refer her as an actresses, they refer her to as a tart and vow to keep a distance form her. The effect of this is the total opposite of what she wants (of how they look at her as a tart) she doesn't want that, she wants to be respected by them. She wants to make something of herself "well I wasn't gonna stay no place where I couldn't get nowhere or make something of myself" this ties up with the American Dream. This is great proof that the dream actually exists. When Curleys' wife dies, Steinbeck presents her death in a sympathetic and descriptive manner- "now her rouged cheeks and her reddened lips made her seem alive and sleeping very lightly..." when he presents her death, we- us and the characters- see the real woman. We see her no more than a tool to be polished and maimed, never to be respected nor confided in. And when she described her dream beforehand, this is a sympathetic ending to her life. For the final part of this essay I will talk about who I personally think is the loneliest. I think that the loneliest character is Curleys' wife because she is the only woman on the ranch and everybody looks down upon her as something disgustingly on a lavatory seat. She is also the loneliest because even her own husband doesn't particularly respect her. I think this text of Mice and Men was an interesting and mind bending book with a gripping and plot. There are some things that I know now that I didn't now before, for instance the Great Depression, I knew roughly what it was but I never knew that this book had the theme of it. Also, loneliness, the other theme, also happens today. Like how it drives people crazy. Like the message John Steinbeck is trying to put out. ?? ?? ?? ?? Ben Elliott 10X1 Of Mice and Men Coursework 01/04/2011 1 ...read more.