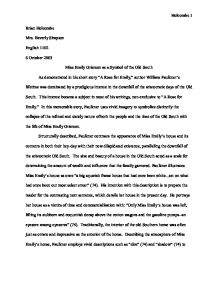 Miss Emily Grierson as a Symbol of the Old South.

Brian Holcombe Mrs. Beverly Simpson English 1102 6 October 2003 Miss Emily Grierson as a Symbol of the Old South As demonstrated in his short story "A Rose for Emily," author William Faulkner's lifetime was dominated by a prodigious interest in the downfall of the aristocratic days of the Old South. This interest became a subject in most of his writings, non-exclusive to "A Rose for Emily." In this memorable story, Faulkner uses vivid imagery to symbolize distinctly the collapse of the refined and stately nature of both the people and the time of the Old South with the life of Miss Emily Grierson. Structurally described, Faulkner contrasts the appearance of Miss Emily's house and its contents in both their hey-day with their now dilapidated existence, paralleling the downfall of the aristocratic Old South. The size and beauty of a house in the Old South acted as a scale for determining the amount of wealth and influence that the family garnered. Faulkner illustrates Miss Emily's house as once "a big squarish frame house that had once been white...set on what had once been our most select street" (74). His intention with this description is to prepare the reader for the contrasting next sentence, which details her house in the present day. ...read more.

Of her own opinion, Miss Emily represents the last of "the high and mighty Griersons" (74) who were once an influential and affluent family in the town's society. Faulkner further details Miss Emily's pretentious opulence as he describes her demeanor: "She demanded more than ever the recognition of her dignity as the last Grierson" (77). Contrastingly, the people of the town believed that Miss Emily holds herself "a little too high" (76) for what she really is. In spite of the villagers' belittling opinions and contrasting views, Miss Emily "carried her head high enough" (77) even when the townspeople believed her reputation to be worthless. Though the townspeople view her as high-faluting, they depressingly refer to her as "poor Emily" (77) because they understand and regret that she is still unwed and a recluse. After her death, Faulkner states outright Miss Emily's connection to the Old South as he tells that she lies in the ground with "the representatives of those august names" (74) and with the Confederate and Union dead lost in the Civil War. Even posthumously, she continues to represent the quintessential Southern belle who becomes riddled with social disgrace and pity, paralleling the downfall of the patrician Old South. ...read more.

Faulkner also asserts that insanity runs in Miss Emily's family, as her old-maid great-aunt had gone mad years earlier from loneliness, which may explain Miss Emily's decreased mental state. So, Faulkner develops Miss Emily as being a lady of former beauty and sanity, but age and loneliness riddle her life and ravish her attractiveness and drive her mad. This downward spiral of the attractiveness and health of Miss Emily is intended to represent the defeat and downfall of the Old South. Faulkner uses Miss Emily and her house, which once both represented pride, beauty, and opulence, to symbolize the downfall of the Old South. At its height, the Old South meant beauty and power, but with the defeat in the Civil War, all that was once the Old South came to an abrupt end. This is mirrored in Miss Emily's life, as both she and her house were once beautiful and outstanding representation of Southern society. But, with time and misery, she experienced a tragic downfall into the depths of madness and loneliness. Faulkner's tremendous fascination with the Old South influenced this story greatly. Within this story, he wonderfully succeeds at using imagery to symbolize the decay and destruction of the aristocratic Old South with the aristocratic, Southern belle of old, Miss Emily. ?? ?? ?? ?? Holcombe ...read more.

This student written piece of work is one of many that can be found in our GCSE Bronte Sisters section.