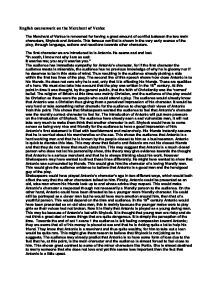 English coursework on the Merchant of Venice The Merchant of Venice is renowned for having a great amount of conflict between the two main characters, Shylock and Antonio. This famous conflict is shown in the very early scenes of the play, through language, actions and reactions towards other characters. The first character we are introduced to is Antonio. He seems sad and lost. "In sooth, I know not why I am so sad: It wearies me; you say it wearies you." The audience has immediate sympathy for Antonio's character, for if the first character the audience meets is miserable, the audience has no previous knowledge of why he is gloomy nor if he deserves to be in this state of mind. Thus resulting in the audience already picking a side within the first two lines of the play. The second line of this speech shows how close Antonio is to his friends. He does not care why he is sad, only that it is affecting his friends. These are qualities of a hero. We must also take into account that the play was written in the 16th century. At this point in time it was thought, by the general public, that the faith of Christianity was the 'correct' belief. The religion of Britain at this time was mainly Christian, and the audience of the play would be Christian as these were the people who could attend a play. The audience would already know that Antonio was a Christian thus giving them a perceived impression of his character. It would be very hard or take something rather dramatic for the audience to change their views of Antonio from this point. This shows that Shakespeare wanted the audience to feel that Antonio's character was the morally correct character to feel for. The introduction of Antonio will put more pressure on the introduction of Shylock. The audience have already seen a sad vulnerable man, it will not take very much to make them think that another character is evil. ...read more.

And jewels, two stones, two rich and precious stones, Stolen by my daughter! Justice! find the girl; She hath the stones upon her, and the ducats.' They also use the expression of Shylock's actions as being 'variable,' this says a lot about Shylock's character. This statement may show that Shylock's true colours are starting to show. After all, in the following scenes Shylock's 'evil' side is shown, he refuses to display any signs of mercy in the court room scene. Solanio may mean that Shylock's character has a unusual way of reacting when he lost his daughter. The word variable may suggest that Shylock cares more about his money then his daughter. If you had to count up the amount of times he exclaims about his daughter's disappearance to his money's disappearance he seems more concerned about the loss of his riches, with him using the word daughter 5 times and the word ducats 6 times! Shylock's speech could sway the audiences' opinion of him in two ways. They may think that Shylock's reaction is very out of character for him. This would make them have more sympathy for Shylock after all there are not many other parts in the play where he gets emotional. If this were the case it would show Shakespeare's development of the Jew, he is building a soft, vulnerable character for the play. However this speech may also show that Shylock is a cold man with no feelings towards other humans, only a thirst for his own wealth. Towards the end of this speech he stops referring to Jessica as his daughter and as 'the girl.' Also at the end the speech seems to be centred more on finding the ducats and jewels rather than Jessica. This would make the audience feel almost hatred towards Shylock. This may show Shakespeare developing the audience's knowledge of a cruel man that has no other intention in life then to carry out revengeful schemes and be successful financially. ...read more.

He intends to remove the flesh himself. Shylock is just about to kill Antonio in the court, with the audience dreading the worst, when Portia interrupts - unveiling her plan to the audience. She tells Shylock of the 'finer points of the law.' That he is not to spill a drop of Christian blood and in fact that he is not allowed to take anything but flesh from Antonio. Portia tells Shylock to have his pound of flesh but if he is to break the law he will lose all of his land and goods, and he will die! Shylock at this point realizes that it is impossible for him to carry out the bond and asks for the money. Personally this shows me that though Shylock seems very confident throughout the play, he has planned and prepared for the worst. He is getting out as quickly at possible. This shows that he is a clever man who always plans for the worst case scenario. Portia (to the surprise of the whole court) says that Shylock shall have nothing but the bond! At this point Shylock begins to leave, accepting defeat. Portia again surprises the court, by saying that Shylock must beg for his life from the Duke. This humiliates Shylock in front of all of his enemies. The end of the scene literally shows the breakdown of Shylock from a confident man who will settle for nothing but his revenge, to a weak individual begging for forgiveness. Antonio says that Shylock should get back half of his money on two conditions. That he leaves it to Jessica and Lorenzo in his will and that he converts to Christianity. Shylock agrees to this and leaves the court room. The play ends with the audience feeling that Antonio is lucky to be alive and that he has had a victory against Shylock. They will also feel that Shylock has learnt his lesson and that not only has Antonio beaten him but Christianity too! This would be a very important victory in the 16th Century. ...read more.