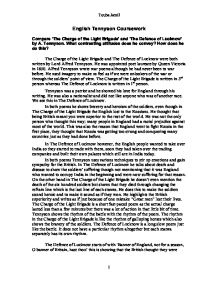 English Tennyson Coursework Compare 'The Charge of the Light Brigade' and 'The Defence of Lucknow' by A. Tennyson. What contrasting attitudes does he convey? How does he do this? The Charge of the Light Brigade and The Defence of Lucknow were both written by Lord Alfred Tennyson. He was appointed poet laureate by Queen Victoria in 1850. Alfred Tennyson wrote war poems although he had never been to war before. He used imagery to make us feel as if we were onlookers of the war or through the soldiers' point of view. The Charge of the Light Brigade is written in 3rd person whereas The Defence of Lucknow is written in 1st person. Tennyson was a patriot and he showed his love for England through his writing. He was also a nationalist and did not like anyone who was of another race. We see this in The Defence of Lucknow. In both poems he shows bravery and heroism of the soldiers, even though in The Charge of the Light Brigade the English lost to the Russians. He thought that being British meant you were superior to the rest of the world. He was not the only person who thought this way; many people in England had a racial prejudice against most of the world. This was also the reason that England went to fight Russia in the first place, they thought that Russia was getting too strong and conquering many countries just as they had done before. ...read more.

The Defence of Lucknow also talks about the fact that the soldiers wives and children were in India while the battle was going on. It says 'Women and children among us, God help them, our children and wives.' It is trying to create sympathy for the British by saying that the Indians had no regard for innocent people, although it is the English who weren't considerate to others. They used to cover the bullets thy used with pig and cow fat. The pig is an impure animal for Muslims and the cow is sacred to the Hindus. These were the two main religions at this time in India. Tennyson is just trying to create sympathy and empathy for the English and hatred to the Indians. The Defence of Lucknow describes the battle with a lot of death. It says 'Every man die at his post' then it repeats the word death at the beginning of almost every line in that stanza. It names each place where people were dying and mentions how as well. It sounds as if there are bullets flying everywhere because it says 'Bullets would sing by our foreheads, and bullets would rain at our feet'. This repetition make it sound as if the British were surrounded which is how Tennyson wants us to feel, as if there is no hope for them. He also shows this by saying 'Hold it we might-and for fifteen days or for twenty at most.' ...read more.

The British win and again think they are superior and ridicule the idea that Indians could beat them. When describing the enemy in The Defence of Lucknow, Tennyson uses racism he calls them things like dark faces even while praising them. When he is praising the Indians who fought alongside the British so they could earn a status he thanks the Indian brothers who have dark faces. He also calls the Indians fighting against them brutes and murderous moles, this is because the Indians fought from underground and they would be camouflaged by the earth. When Tennyson wanted to describe them as heartless he compared the Indians to tigers because tigers are vicious and they do not care what they kill as long as they will gain from it. He also believed that the Indians should not have fought against the British in the first place because they were supposed to be under the British rule and so calls them traitors. In The Charge of the Light Brigade, Tennyson makes no racial remarks about the enemy as they are Russian. He only mentions once that the enemy is 'Cossack and Russian' and that was it. I liked the Charge of the Light Brigade better than The Defence of Lucknow because it wasn't as long and had less reference to death and race. I found The Defence of Lucknow was too dramatic because of the "superiority" of the British made it less realistic. I liked the fact that The Charge of the Light Brigade was deceiving so you had to think more to realise what the poem actually meant. ?? ?? ?? ?? Touba Jamil 1 ...read more.